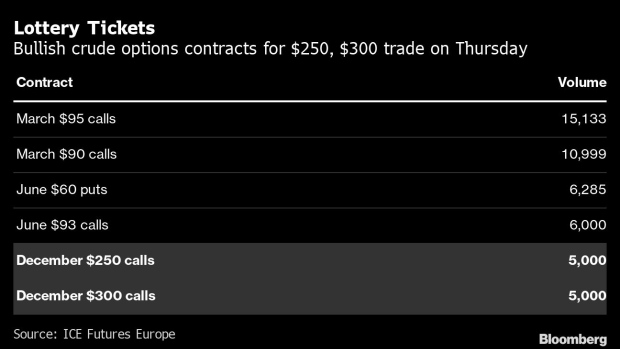 The oil drilling rig stands at the oil and gas field processing and drilling site operated by Ukrnafta PJSC in Boryslav, Lviv region, Ukraine, on Thursday, July 4, 2019. Ukrnafta co-owner, Naftogaz JSC, the largest gas supplier in the country of 42 million people, is seeking funds to accelerate gas purchases ahead of the heating season and a potential disruption of gas transit by Russia’s Gazprom PJSC from the start of 2020. Photographer: Vincent Mundy/Bloomberg , Bloomberg

(Bloomberg) -- With the world gripped by high energy costs and soaring inflation, oil options that would profit a buyer from Brent crude hitting $250 a barrel are changing hands.

With crude near seven-year highs of about $80 a barrel, bets on futures taking a leg higher have grown in recent months. Options for $100 a barrel have been changing hands for weeks, along with a smattering of other contracts above that. This is the first time this year that traders have been betting on crude exceeding $200. The total cost of the contracts is about $800,000.

The trades also came on the same day as JPMorgan Chase & Co analysts including Christyan Malek wrote in a note to clients that oil could spike to above $100. There’s an increasing possibility that OPEC and its allies will divert crude supplies away from the U.S. because of souring relations with the Biden administration, they said. At the same time, producers have limited capacity to ramp up output in response to high prices, they said.

“We believe a worsening rhetoric between the U.S. administration and OPEC+ could deteriorate further into a scenario whereby the latter redirects U.S. exports eastward,” they wrote.