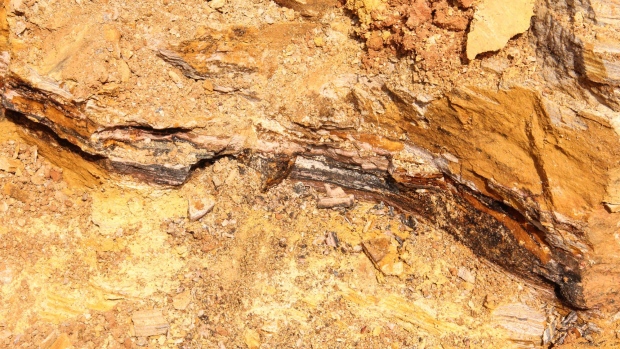 Cobalt ore lays visible in a newly dug pit at the Kasulo township in Kolwezi, Democratic Republic of the Congo, on Saturday, Feb. 24, 2018. So-called artisanal mining is as commonplace as farming in many parts of Congo. Photographer: William Clowes/Bloomberg , Bloomberg

Trading house Trafigura Group Ltd. is in talks with the Democratic Republic of Congo about financing a new state-controlled company that will buy all the African nation’s hand-mined cobalt.

Entreprise Generale du Cobalt will need $80 million to $100 million to begin buying cobalt from so-called artisanal miners, according to people familiar with the matter, who asked not to be named because the negotiations are private. Mines Minister Willy Kitobo Samsoni said last week that hand-dug metal accounts for a fifth of cobalt output in Congo, the world’s biggest producer of the essential ingredient in lithium-ion batteries for electric vehicles.

Trafigura declined to comment. Kitobo didn’t respond to messages seeking comment, nor did Albert Yuma, chairman of state-owned miner Gecamines.Gecamines set up EGC last year in a bid to influence cobalt prices and better regulate small-scale artisanal mining, long criticized for unsafe working conditions and its use of child labor. Warnings about long-term shortages caused cobalt prices to spike in 2017 and 2018, before slumping from too much supply. Lower prices cut production by artisanal miners last year, according to trading house Darton Commodities.Congo supplies more than 60% of world cobalt production, mainly through industrial miners like Glencore Plc and China Molybdenum Co. The new company will have a monopoly on the purchase of all artisanally mined cobalt ore, which it will sell to processing plants in Congo.Trafigura already purchases artisanally mined cobalt in the country, and is funding a pilot project to formalize such digging at Chemaf Sarl’s Mutoshi mine.“The project is by no means perfect,” James Nicholson, Trafigura’s head of corporate responsibility, wrote in a report on the project last year. But “it has delivered a notable social and economic impact at a local level,” he said.More than 200,000 people make their living digging cobalt and copper in Congo’s southeast Katanga region, according to the report.

--With assistance from Andy Hoffman.

To contact the reporter on this story: Michael J. Kavanagh in Kinshasa at mkavanagh9@bloomberg.net

To contact the editors responsible for this story: Lynn Thomasson at lthomasson@bloomberg.net, Dylan Griffiths, Liezel Hill