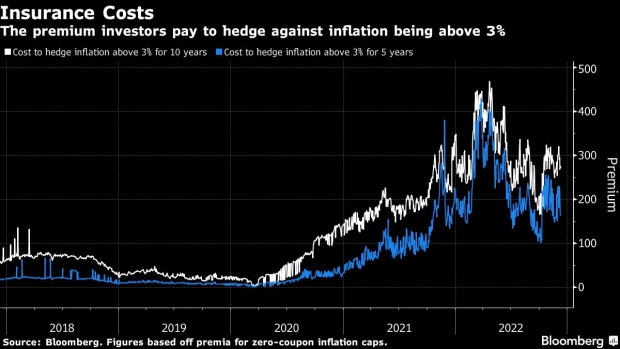 (Bloomberg) -- Bond traders and US consumers alike are getting more comfortable with the idea that inflationary pressures have peaked in the world’s top economy, allowing the Federal Reserve to adopt a more cautious approach.

So-called breakeven rates on inflation-linked debt and derivatives — measures of what traders anticipate consumer prices will do over the coming decade — have slipped from a week ago. That’s just as preliminary data from the University of Michigan showed consumers’ short-term inflation expectations unexpectedly ebbed to the lowest level in more than a year.

All that sets the scene for the November consumer price index on Tuesday, which is expected to show a 7.3% year-on-year increase, down slightly from a month earlier. A day later, the Fed is forecast to deliver a half-point hike, capping a streak of four straight three-quarter-point moves.

Bond traders expect the monetary authority’s overnight rate to plateau at about 5% by mid-2023 as the central bank takes time to assess the impact of its policy changes. Odds of a modest US recession and waning price pressure in the coming year has fueled a rally in Treasuries over the past month, led by longer-dated securities.

The following is a series of indicators on how the market views US inflation.