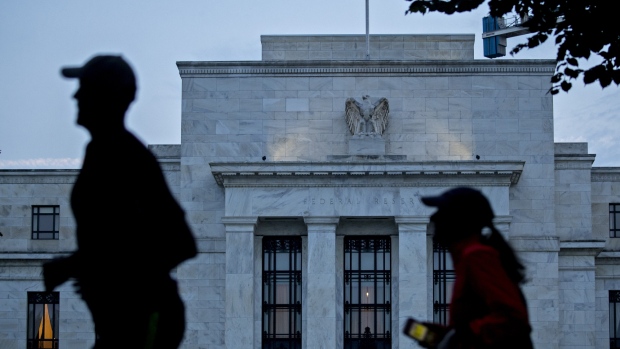 (Bloomberg) -- Less than two weeks ago, Federal Reserve Chairman Jerome Powell said he didn’t see the central bank’s first interest-rate cut since 2008 as the start of an extended easing cycle. Tell it to the eurodollar options market, where demand for protection against the policy rate returning to zero and staying there is raising eyebrows.

Open interest in call options expiring in December 2021 and beyond has grown to exceed a million contracts. Most is in strikes -- currently far out of the money -- that would turn to gold if Powell was wrong. One such position is a $1.25 million wager -- bought Friday and Monday -- that the Fed will cut rates by a quarter point three more times this year and at least four times next year, and leave them at the zero lower bound until late 2021. Last week, a similar scenario was hedged with June 2022 eurodollar options.

Others are coming around. Last week Pacific Investment Management Co. joined the chorus of voices warning that U.S. Treasury yields may eventually go negative. Meanwhile, banks have started to capitulate on their year-end Treasury yield forecasts. UBS on Monday slashed its target for the 10-year to 1.25%, citing further escalation of trade tensions and pressure from lower European yields.

Market-implied Fed expectations remain near the most dovish levels of the economic cycle -- with a reduction of around 28 basis points priced in for the September meeting -- despite some paring on Tuesday after the Trump administration postponed tariffs on some Chinese imports.

It remains to be seen whether that will be enough to prompt second thoughts about the wisdom of hedging for the zero lower bound.

To contact the reporter on this story: Edward Bolingbroke in New York at ebolingbrok1@bloomberg.net

To contact the editors responsible for this story: Benjamin Purvis at bpurvis@bloomberg.net, Elizabeth Stanton, Nick Baker