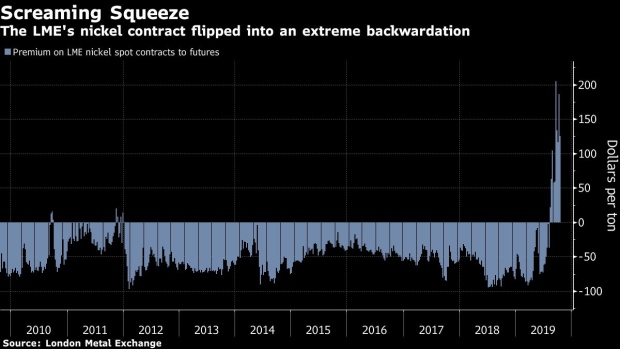 (Bloomberg) -- Traders are moving nickel stockpiles from China to other Asian warehouses to capture hefty profits by delivering to the London Metal Exchange.

At least 15,000 tons of refined nickel left bonded warehouses in China since September, according to traders and logistic managers with knowledge of the matter. The inventory is on its way to LME storage facilities in Taiwan, Malaysia and Singapore, said the people, who asked not to be identified as the information is private.

Merchants could earn between $20 and $50 a ton by purchasing nickel from China’s tax-free zones and delivering the metal to offset London contracts due in October and November, they said. The cash discount in the Chinese market, extreme backwardation on the LME and incentives offered by the warehouses make it a profitable trade, they added.

The metal that’s set to reach LME warehouses is another example of the convulsions within the nickel market after Indonesia promised to ban raw-ore exports next year, unleashing a panic over possible shortages. In the past month, about half of all the nickel in LME warehouses has been withdrawn and spot contracts have traded at the biggest premium to futures in 12 years, in a condition known as backwardation.

China’s Tsingshan Holding Group Co. was one of the main forces behind a record drawdown in LME nickel inventories in early October, according to people familiar with the matter. Tsingshan is working with financing banks including JPMorgan Chase & Co. to take the metal off the exchange, the people said. Estimates for how much they bought range from 30,000 to 80,000 tons.

The nickel supply squeeze could signal a “Hamanaka moment,” according to Citigroup Inc. analysts including Oliver Nugent. That’s a reference to the Sumitomo Corp. trader who hoarded copper, driving up prices before the market collapsed in the 1990s.

The Citigroup report highlighted the disconnect between futures and physical markets. The LME nickel contract is signaling an extreme shortage, while conditions in the physical market are looser. That represents a “major downside risk” to prices given that global growth is starting to weaken, the bank said.

--With assistance from Mark Burton.

To contact the editors responsible for this story: Alexander Kwiatkowski at akwiatkowsk2@bloomberg.net, Lynn Thomasson, Nicholas Larkin