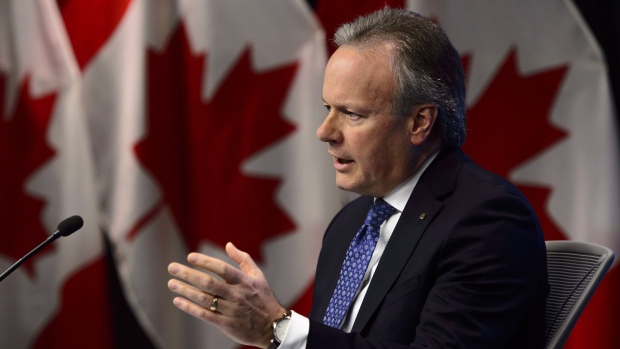 The sharp slowdown in Canadian growth has investors fretting that the economy can’t handle interest rates as high as the nation’s 2 per cent inflation target.

Fourth-quarter growth of 0.4 per cent -- half the rate predicted by even the most bearish analyst -- has stoked fears of recession and leaves room for short-term debt to rally further should investors’ outlook for the Bank of Canada shift from no-more interest-rate hikes to the possibility of cuts.

“Even as FOMC expectations declined materially in the past six months, financial markets continued to defend the idea that Bank of Canada policy would continue to move higher until the real policy rate was positive at the limit,’’ Ian Pollick, head of rates strategy at the Canadian Imperial Bank of Commerce, said in a note to investors.

On the heels of the fourth-quarter stock rout and the worsening outlook for global growth, investors are questioning the Bank of Canada’s view that its policy rate needs to be above zero in inflation-adjusted terms to keep the economy from running too hot or cold.

“Short-rate markets are allowing for the possibility that r-star could be negative in Canada,’’ he writes.

He uses two- and one-year forward overnight index swap rates less core inflation to derive the market’s estimate o f the neutral rate, the level of the policy rate which is neither stimulative nor contractionary when the economy is operating at full capacity.

The Bank of Canada thinks that this ideal resting place for its policy rate is between 0.5 and 1.5 per cent, once the rate of growth in price pressures is stripped out. Policy makers have been keen to emphasize the wide range of uncertainty surrounding this unobservable variable.

Although traders doubt the Canadian policy rate will end higher than 2 per cent, they aren’t yet pricing in a flip from tightening to easing over the next two years. Compare that to the U.S., where the downward-sloping federal funds futures curve implies a cut is more likely than a hike in 2020.

That leaves “considerable room to rally’’ at the front of the Canadian yield curve in the event of worsening data or a dovish shift from the Bank of Canada when it delivers its rate decision on Wednesday, which could also foster a steepening of the gap between short- and longer-term interest rates, according to the strategist.

Getting inflation-adjusted policy rates back to at least zero has been something of a milestone and professed low-water mark for the Bank of Canada’s tightening cycle highlighted at various times over the past year.

“We are confident that neutral would not be where the interest rate is still negative in real terms, which is where we are today, so it should be a rate that’s higher than today,’’ said Governor Stephen Poloz following the central bank’s January rate decision.

The Bank of Canada is universally expected to keep rates unchanged at 1.75 per cent in its announcement on Wednesday. Updated economic projections, as well as a review of the range of neutral estimates and potential growth, will feature in its April Monetary Report.

“The market always struggled with the idea that r-star was materially higher than 0 basis points in Canada,’’ added Pollick in an email. “I suspect the pivot by the FOMC -- stating that perhaps neutral is less clear or closer than they thought -- is a dynamic now being absorbed into Canada.”