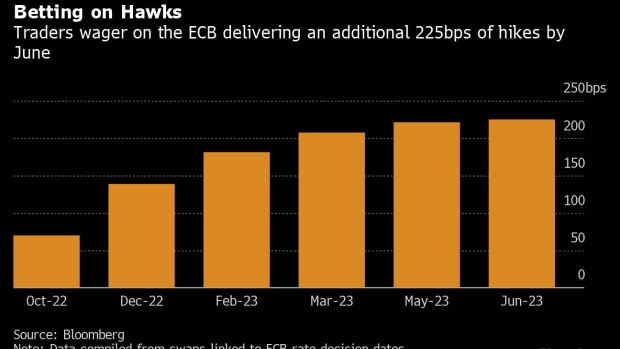 (Bloomberg) -- Traders are ramping up bets on the extent of rate hikes by the European Central Bank and the Bank of England, as policy makers globally step up the fight against inflation.

Swaps tied to central bank meetings show the ECB raising its deposit rate to 3% by May, double the level that was expected at the start of the month. In the case of the BOE -- which is expected to hike rates later on Thursday -- the key rate was briefly seen rising to 5% in September 2023.

The relentless surge in wagers for higher borrowing costs was exacerbated by the Federal Reserve’s decision Wednesday to raise interest rates by three-quarters of a percentage point. It also shows the battle against inflation, which has proved far more persistent than most expected, is far from over.

“Short term inflation is proving stickier than what central banks want and is also proving difficult to predict,” Jefferies International strategist Mohit Kumar wrote in a note. “We expect the hawkish rhetoric to continue for the coming weeks with a clear focus on bringing down inflation.”

European bonds fell, led by the short-end, as trading kicked off Thursday. The two-year German yield jumped 14 basis points to 1.90%. ECB President Christine Lagarde said earlier this week that borrowing costs will rise further in the months ahead, even after officials front-loaded initial moves in what she called “the fastest change in rates in our history.”

The ECB has already raised the deposit rate a cumulative 125 basis points since July. It lifted borrowing costs by three-quarters of a percentage point to 0.75% earlier this month in a bid quell inflation running at a record annual rate of 9.1%.

Traders are bracing for the BOE to deliver its seventh back-to-back rate hike later today. It’s also likely to confirm plans to sell more of the £895 billion of bonds acquired during the quantitative-easing program, amping up the pressure on gilts. Economists expect the UK central bank to lift its benchmark lending rate a half percentage point. The two-year gilt yield rose 10 basis points to 3.49%.