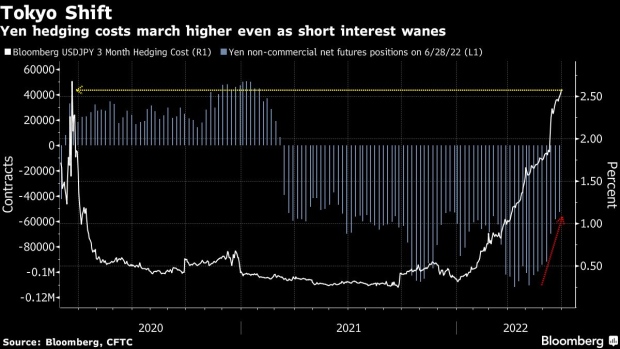 Bundles of Japanese 10,000 yen banknotes at the Birdy Exchange in Hong Kong, China, on Wednesday, June 16, 2022. Amateur investors have been coming to swap their bills for yen at Birdy Exchange, seeing a buying opportunity in the currency's fall to its weakest levels against the Hong Kong dollar since 2002. Photographer: Lam Yik/Bloomberg , Bloomberg

(Bloomberg) -- Evidence is building that the worst of the yen’s rout may be over amid concerns about a global recession and lingering speculation over a Bank of Japan policy shift.

Speculators have cut their bearish bets on the Japanese currency for seven straight weeks with net-short non-commercial positions falling to the lowest this year, according to the latest data from the Commodity Futures Trading Commission. And a retreat in Treasury yields -- whose rise had weighed heavily on the yen -- has yet to fully feed through to the currency market, according to Citigroup Inc.

“We see reasons to assume the rally in US Treasuries can prove sticky,” Citi strategists Michael Chang and Jabaz Mathai wrote in a note Friday. If this is the case, “there would be significant downside to dollar-yen.”

The pair recommended investors use the option market to bet on such a decline via a so-called put spread -- a strategy which pays out if dollar-yen falls.

Betting against the yen as been one of the year’s hottest macro trades with the currency caught between a BOJ keeping rates pinned to the floor to boost Japan’s economy and a Federal Reserve hiking aggressively to rein in inflation. It is the worst performer in the Group-of-10, down some 15% against the dollar.

But growing evidence of a slowdown in manufacturing from the US to Asia has added to fears of a global recession, bolstering the case for traditional havens like the yen and Treasuries. And speculation still hasn’t gone away of a hawkish shift from the BOJ, something which could cause a sharp rally in the yen.

Benchmark Treasury yields tumbled below 2.80% on Friday, down from a mid-June high of 3.5%. Dollar-yen traded around the 135 level on Monday versus last month’s peak of 137.