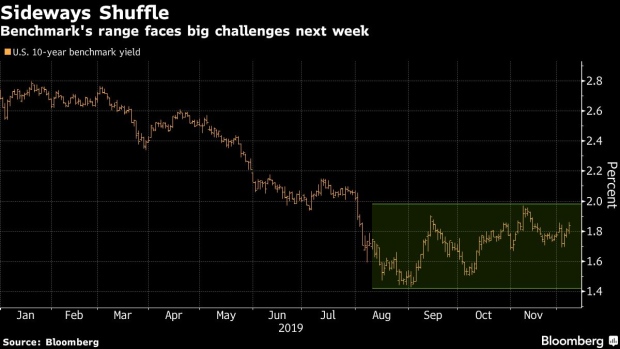 (Bloomberg) -- Investors face a crush of events next week that could sweep away the biggest hurdles to a full-blown race into riskier assets, if things line up just right.

Over the second half of the week, possible catalysts for a Treasury market sell-off will arrive in close succession: Policy decisions from the U.S. and euro-zone central banks are expected to offer no fresh hints of easing in the cards, and the U.K. election could finally pave a more resolute course for an exit from the European Union.

Treasuries were already on the ropes Friday, thanks to a U.S. payrolls report that surpassed analysts’ expectations. That pushed the S&P 500 to the brink of a record high, drove market pricing for a full Federal Reserve rate cut to the end of 2020, and thrust the 10-year yield toward the upper end of its recent range, at around 1.84%.

The events ahead will determine the macroeconomic backdrop heading into the new year, but the question for investors is how much of the real action next week is already baked in. For Kathy Jones at Charles Schwab & Co., the more pressing issue remains U.S.-China trade talks. The big catalyst for risk appetite and significantly higher yields in one of the last actively traded weeks of the year would be a credible signal that the U.S. will forgo the additional tariffs it’s threatening to impose on Chinese goods on Dec. 15, she said.

“We do have a confluence of things next week and there’s a good likelihood that yields will rise -- but will they just rip higher?” said Jones, chief fixed-income strategist at Charles Schwab. “You’d need some really surprisingly good news on the trade war.”

Global growth headwinds from trade friction have helped pull benchmark U.S. 10-year yields down about 80 basis points in 2019, driving Treasuries to a 7.3% return this year through Dec. 5. It’s shaping up to be the best annual performance since 2011.

And in Jones’s view, economic numbers could still have sway.

Treasuries could take a hit ahead of the week’s high-profile events if the consumer price index reading due Dec. 11, the same day as the Fed decision, shows an annual increase faster than the expected 2%. That could unsettle the widely held view that inflation pressures are nowhere near strong enough to fit the Fed’s stated criteria for a rate hike. But there’s also potential for yields to fall should the Dec. 13 retail sales figures counter the market’s conviction that the U.S. consumer is holding up.

While the data may fall short of alarming the Fed’s inflation hawks, it’s clear from Chairman Jerome Powell’s recent statements that his view of the economy is biased toward optimism -- as a glass “more than half full.”

There hasn’t been much in comments from Fed speakers to suggest they’ve downgraded projections for interest rates -- which will be updated Wednesday -- since September. At the time, the “dot plot” of policy makers’ views suggested that the majority see the next move as a hike rather than a cut, and most expect rates to remain on hold or move higher in 2020.

Whichever way traders see the risks tilting through year-end, the coming week could be one of the last good opportunities of the decade to jump into the fray, before clearing out for the holidays.