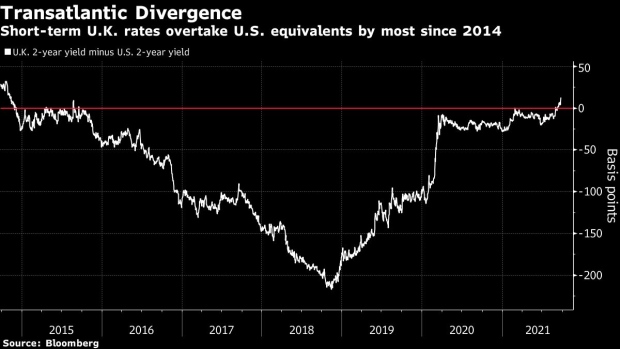 (Bloomberg) -- Traders are betting that in a contest to raise borrowing costs first, the Bank of England will be the runaway winner over the Federal Reserve.

Market expectations for a U.S. liftoff of 25 basis points shifted to late next year from 2023 previously, after the Fed on Wednesday confirmed consensus for the start of unwinding asset purchases this year. Yet on Thursday, the BOE opened the door to a hike as soon as November, pulling positioning on rates further and faster. Money markets now see a 15-basis-point rate increase in February, followed by an additional quarter-of-a-percentage point move in August.

“Historically the Fed has the led the global policy cycle. But it’s not set in stone that they go first and then everyone else follows on,” said John Wraith, head of U.K. and European rates strategy at UBS Group AG. “It’s easily conceivable that the Monetary Policy Committee, either willingly or being forced to by market levels, raises rates first.”

Minutes of the BOE’s MPC meeting showed that members agreed any future tightening should start with an interest-rate increase, even if that “became appropriate” before its bond-buying program finishes around the end of the year.

It was that line that ratcheted pressure on December 2021 short sterling futures, according to Simon Harvey, senior FX market analyst at Monex Europe. That said, “we would need to see signs of substantial wage pressure to force the BOE into even earlier hiking than markets are currently pricing,” he added.

While traders expect the BOE to move earlier than the Fed, they see it deploying less in the way of rate hikes in coming years. They’re pricing 79 basis points of tightening in the U.K. over the next three years, compared with more than 100 basis points for the U.S.

“The overall scale of tightening looks likely to be less than for many other developed central banks,” HSBC Holdings Plc head of European FX research Dominic Bunning wrote, citing market pricing and BOE indications that the U.K. may have a lower neutral rate. This would be an “impediment” to lasting pound strength, he added.

The pound was little changed on Friday, a day after climbing 0.7%, the biggest gain in more than two months.

For Nomura International Plc’s Jordan Rochester, there’s room for further sterling strength against the dollar after this week’s meeting.

“It really raises the probability of the BOE tightening policy more aggressively than the Fed, with one or even the possibility of two rate hikes next year from the BOE being priced in,” he said.