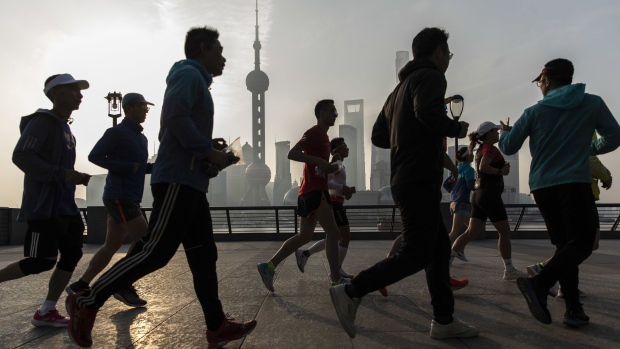 Joggers run along the Bund as the Lujiazui Financial District stands in the background in Shanghai, China, on Saturday, April 10, 2021. China's population is aging more quickly than most of the worlds developed economies due to decades of family planning aimed at halting population growth. Photographer: Qilai Shen/Bloomberg , Bloomberg

(Bloomberg) -- China’s annual economic summit for its leaders may offer guidance for traders deciding on their 2022 stock strategies, after Beijing indicated growth is a top priority with a tilt toward easing this week.

The economy is facing pressure from a deepening property market slowdown and weak domestic demand amid stringent virus controls. The central bank announced this week a cut in the reserve requirement ratio for most banks, while party leaders have vowed to meet reasonable housing needs.

Investors are keen to see if more measures will be fleshed out at the Central Economic Work Conference, shedding light on sectors that may win Beijing’s favor next year.

“The CEWC will include more detail on work plans for next year, and I’m looking for what other polices could be introduced to keep economic growth within reasonable range, under the current pressures,” said Wang Chen, a Shanghai-based partner of XuFunds Investment Management Co. He added that it is more likely for credit supply to be greater than liquidity getting looser.

Here’s what other market watchers are saying: