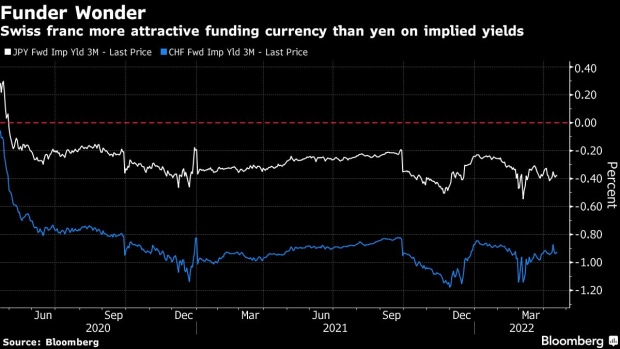 (Bloomberg) -- Carry traders would do well to take a second look at funding favorite the yen -- as even at a 20-year low there are better sources to fund the purchase of higher-yielding currencies.

On the surface the yen looks like the perfect well for carry traders to dip into, under pressure from a Bank of Japan determined to keep local yields anchored to the floor even as interest rates around the world push higher. But despite consensus building for further losses -- peers look like better funding options on certain key metrics.

That’s the upshot of a Bloomberg analysis of an array of funding currencies, which shows investors may be better off considering the Swiss franc, Taiwan dollar and euro rather than the rapidly weakening yen. These offer a mix of lower implied yields and volatility -- hallmarks of a desired funding source for carry traders -- who borrow to buy higher-yielding currencies to earn returns.

The findings suggest demand to sell the yen for carry purposes may wane, easing pressure on the beleaguered currency, should investors opt for the more attractive alternatives.

“The yen doesn’t look like the carry funding currency it once was,” said Yuji Kameoka, chief foreign-exchange strategist at Daiwa Asset Management Co. in Tokyo.

Carry trades have been a bright spot in a volatile market for rates strategies this year, the Bloomberg GSAM FX Carry Index has climbed 6%, led by stellar returns in Brazil among others. Conversely, a gauge of the global bond market has fallen over 9% -- set for its biggest loss on record.

An investor eyeing the near 20% surge in the Brazilian real against the dollar -- a 34% rise versus the yen -- would naturally consider the latter to be the optimal funder.

But take yields, in this case three-month implied ones from the currency forward market. While the yen offers a yield of minus 0.4%, the Swiss franc is more attractive from a funding point of view at minus 0.9%, as is the Taiwan dollar at minus 1.6%.

“The Swiss franc feels like a better choice than the yen” as far as yields are concerned, said Kiyoshi Ishigane, chief fund manager at Mitsubishi UFJ Kokusai Asset Management Co. in Tokyo. With its extended decline “the question is if it’s profitable to do carry trades with the yen.”

The yen extended its longest losing streak in at least half a century Tuesday as traders looked through government warnings about the speed of the currency’s decline, focusing instead on the widening gap between Japanese and U.S. interest rates.

Officials are facing a tough battle to slow moves in the currency as the stark contrast between policies of the BOJ and Federal Reserve invites a wave of bets on the yen weakening further.

While the policy difference adds to its appeal as a funding source, implied volatility acts as a counterweight. Meanwhile, the Swiss franc burnishes its appeal with limited upside seen from investors, while the euro stands out for its higher liquidity.

The analysis of relative attractiveness of the carry-trade funding currencies was based on five factors including implied yields and volatility. The output for each is an adjusted Z-score -- which measures them relative to the other currencies -- where a higher value points to a more attractive trait as a funding source.