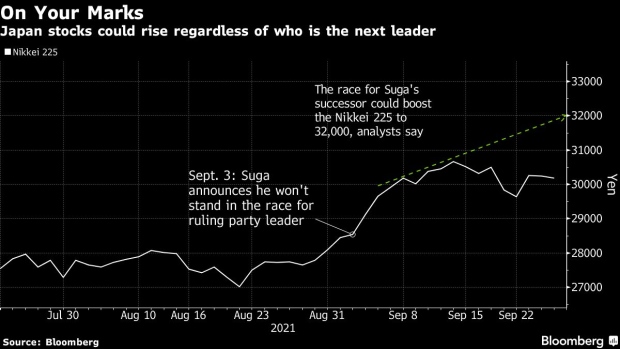 (Bloomberg) -- Investors in Japanese markets are preparing for the unusual specter of a competitive contest for the country’s next leader, and the potential for policies to head in a new direction for the first time in nearly a decade.

The race for head of the ruling Liberal Democratic Party, which takes place Wednesday and will effectively decide the next prime minister, is too close to call. But for the country’s stock markets, anyone is an improvement to Yoshihide Suga. The Nikkei 225 Stock Average has risen nearly 6% since the premier announced he wouldn’t run again, and many analysts expect it to rise further.

“Regardless of who wins, markets will be in a celebratory mood, and the Nikkei 225 could go up to 32,000,” from 30,183 on Tuesday, said Shoichi Arisawa, an analyst at Iwai Cosmo Securities Co. “There isn’t anyone among the candidates that markets really don’t want as the LDP head.”

While the public favors vaccine czar Taro Kono, many analysts expect that former foreign minister Fumio Kishida will ultimately be victorious in a run-off vote. That might give pause to foreign investors who are keen for an English-speaking prime minister and have been net buyers of Japanese stocks since Suga’s announcement.

Kono losing “may be perceived as a disappointment by foreign investors, who tend to be strangely supportive of English-speaking candidates,” wrote Nicholas Smith, a strategist at CLSA Securities Japan Co., who expects Kishida to prevail. “Domestic investors are likely to be far less attached to him.”

Renewable-energy stocks, which have risen with the prospect of a Kono victory, might drop if he loses, Smith said. Nuclear-power plays such as utilities would benefit, he added.

Nonetheless, a Kishida victory is likely to deliver what markets want most -- stability as the country heads into a general election later this autumn.

“In a short-term stance Kishida could provide stability without surprises,” said Tetsuo Seshimo, a fund manager at Saison Asset Management Co. His promises to spend tens of trillions of yen are also likely to appeal to equity investors in the near-term.

While the media has largely focused on Kono and Kishida, former Internal Affairs Minister Sanae Takaichi has seen her standing in public-approval polls grow since entering the race. While unlikely, a Takaichi victory is seen as the most-plausible surprise that could jolt markets. The odds for former Communications Minister Seiko Noda are much longer.

“Takaichi winning would lead to the most fluctuation in markets. Her push for fiscal spending will lead to a stock rally and the yen depreciating,” said Tomoichiro Kubota, a senior market analyst at Matsui Securities Co.

Katsutoshi Inadome, a strategist at Mitsubishi UFJ Morgan Stanley Securities Co. in Tokyo, is among those warning not to discount a Takaichi victory. He says bond markets could become “tumultuous” if Takaichi wins, given contradictory signals from her plans to continue the 2% inflation target but freeze a commitment to balance the nation’s budget.

Investors may also take pause from Takaichi’s hawkish views. “If her actions and comments bring tension to Japan-China relations, there may be repercussions for the travel industry,” said Shunsuke Oshida, the head of credit research at Manulife Investment Management. “Businesses helped by inbound tourism demand may take longer to recover.”

Naomi Muguruma, senior market economist at Mitsubishi UFJ Morgan Stanley Securities in Tokyo, is less concerned with the outcome. “Any initial JGB market reaction is likely to be short-lived, as it is not a change in power,” she said. The focus may turn to Cabinet positions, such whether the long-serving Finance Minister Taro Aso will be replaced.

The next leader’s choice of ministers, including what could be the first change in the Finance Ministry in nearly a decade, will come swiftly into focus after Wednesday’s vote. Events are likely to move fast because the winner selects the new Cabinet lineup and can refresh senior party positions in advance of the autumn general election.