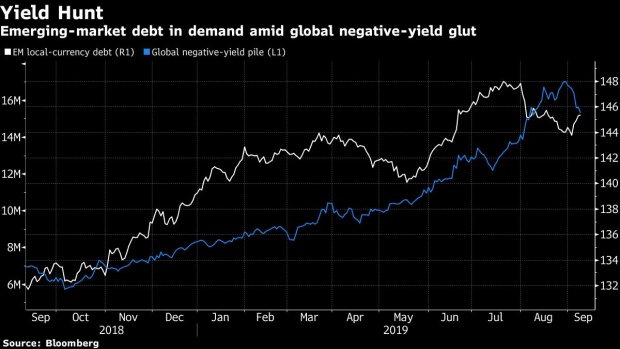 (Bloomberg) -- What emerging-market bonds do next depends on whether Mario Draghi plays ball.

Provided the European Central Bank president lowers borrowing costs deeper into negative territory and restarts a bond-buying program, high-yielding debt in the developing world may see its popularity soar among investors desperate for returns, according to Union Bancaire Privee. And currencies that aren’t sensitive to the euro, such as the Mexican peso and the Brazilian real, will rise, according to Vanguard Group’s active fixed-income unit.

“Following the August correction, one would expect high yielding emerging-market currencies to receive a boost from a dovish message by the ECB,” said Anders Faergemann, a senior money manager at Pinebridge Investments in London. “Latin American currencies stand to benefit more than central and eastern European currencies, which are more correlated with the euro.”

Valuations across emerging markets improved after concerns over global economic growth prompted investors to dump yield for quality. The premium investors demand to hold sovereign bonds blew out in August by the most in a year, while a MSCI Inc. index tracking currencies suffered its biggest loss since 2012, making the assets’ allure even more appealing when compared with developed-market debt.

Emerging-market dollar debt has returned 10.8% this year, competing with U.S. junk bonds for the top spot. A dovish Draghi would could extend this rally, given the expectations for rate cuts across emerging markets. BNP Paribas sees at least 10 central banks to reducing borrowing costs in September, and 15 by end-2019.

With more than 80% of economists surveyed by Bloomberg predicting the ECB will announce a resumption of bond buying, and forecasters seeing the deposit interest rate falling to a record minus 0.5%, here’s what emerging-market investors are saying in the run-up to Thursday’s decision:

Morten Lund, an analyst at Nordea Bank AB in Copenhagen:

Piotr Matys, a strategist at Rabobank in London:

To contact the reporters on this story: Selcuk Gokoluk in London at sgokoluk@bloomberg.net;Adrian Krajewski in Warsaw at akrajewski4@bloomberg.net

To contact the editors responsible for this story: Dana El Baltaji at delbaltaji@bloomberg.net, Alex Nicholson