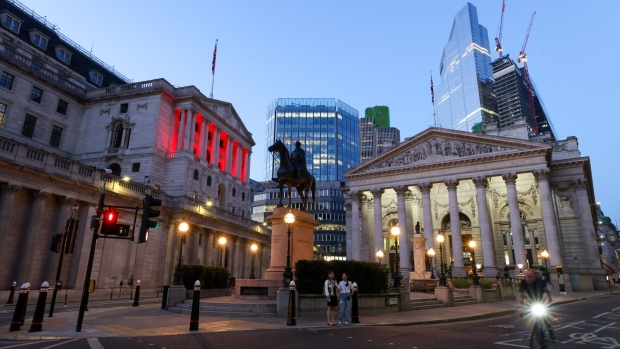 The Bank of England (BOE) in the City of London, UK, on Wednesday, June 15, 2022. The Bank of England should prepare to end interest-rate hikes before a likely recession early next year, according to Tim Congdon, the veteran UK monetarist who was an early prophet of the global inflation shock. Photographer: Hollie Adams/Bloomberg , Bloomberg

(Bloomberg) -- Money markets have baked in a one-percentage-point Bank of England interest rate increase at the November policy meeting, betting that policy makers will rush to counter inflation in the face of more fiscal stimulus.

A one point increase will lift interest rates to 3.25%, according to interest rate swaps tied to meeting dates. Expectations are for borrowing costs to rise to over 5.5% next year which would still be below the last peak set in 2007. BOE officials last raised rates by 100 basis points in 1989.