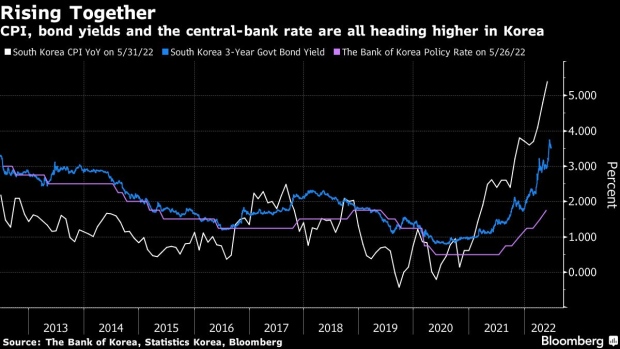 The Bank of Korea headquarters in Seoul, South Korea, on Monday, Nov. 22, 2021. Bank of Korea Governor Lee Ju-yeol has sent clear signals that he intends to hike rate at the monetary policy committee meeting, scheduled on Nov. 25. , Bloomberg

(Bloomberg) -- The Bank of Korea is poised to raise its policy rate by half a percentage point for the first time ever next month to tame inflation that’s at a decade-high and shore up the won, according to trader expectations signaled by market rates.

South Korea’s implied policy rate in six months is around 3.00% as of June 27, Bloomberg calculations of money market rates suggest. That indicates that the central bank may increase rates by 50 basis points once and by 25 basis points three times at its four remaining meetings this year from the current 1.75%.

The BOK has never raised rates by 50 basis points since interest rates became its primary policy tool in 1999, according to the central bank. An outsized move would echo other central banks, including the Federal Reserve and the Reserve Bank of Australia, who are all seeking to control runaway inflation with bigger-than-expected hikes. It could also help stem losses in the won, which had dropped to a 13-year low.

Citigroup Inc. and JPMorgan Chase & Co. are both forecasting a 50-basis-point BOK rate hike next month. Expectations of higher rates have caused Korean government bonds to tumble, with three-year yields rising to an 11-year high of 3.75% this month.

The country’s inflation rate surged to 5.4% from a year earlier in May, the fastest since August 2008. But Finance Minister Choo Kyung-ho said consumer prices may jump more than 6% in June, July and August, in a KBS interview on Sunday. The last time inflation reached 6% in Korea was in 1998.

Putting further pressure on Korean policy makers to act are producer prices that surged nearly 10% in May.

“For the local bond market, June through August could be painful time,” with long-term yields possibly climbing above 4%, said Cho yong-gu, a fixed-income strategist at Shinyoung Securities Co.