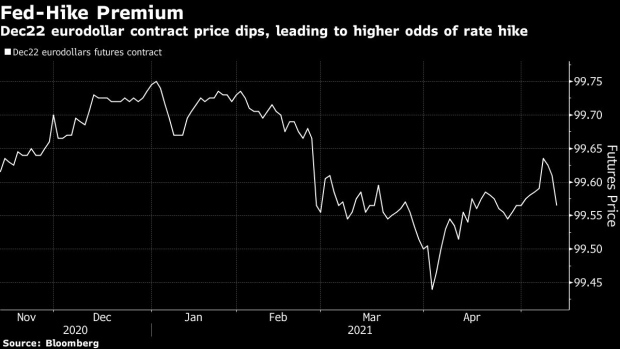 (Bloomberg) -- Rates traders are boosting bets that the Federal Reserve may be forced to hike interest rates next year, much earlier than policy makers have indicated, after blowout U.S. consumer-price data Wednesday intensified the debate about how hot inflation could run.

Eurodollar futures contracts are pricing in more than 80% odds of a quarter-point rate increase by the end of 2022, up from a two-in-three chance at the start of the week. That’s roughly a full year earlier than policy makers have signaled and comes amid growing calls from the likes of former New York Fed President William Dudley, who says the central bank not only needs to raise rates, but should likely do so by much more than investors expect.

Treasury yields and market-based expectations also popped higher after the month-over-month inflation reading was the highest since 2009, but the relatively contained magnitude of these moves suggested traders were not yet envisioning runaway inflation for the near term. Breakeven rates up to five years subsequently fell off their New York session highs, while eurodollar futures volumes were back to levels seen at the start of last week.

“Inflation fears are not unfounded,” said Shahid Ladha, head of Group-of-10 rates strategy for the Americas at BNP Paribas SA. “Inflation and breakevens should continue to rise. However, in the second half of year, the rate of price gains could trend lower.”