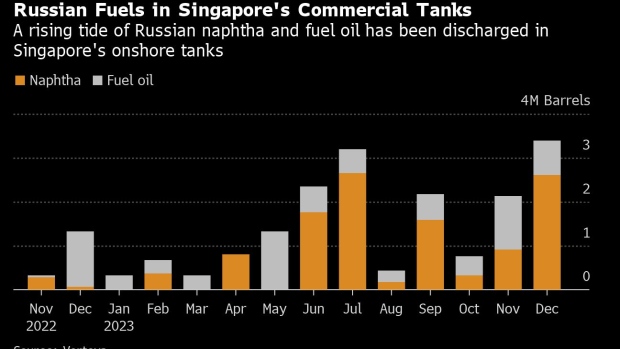 (Bloomberg) -- Demand is soaring for oil storage tanks in Singapore, in a sign that a flood of Russian fuel is being blended and re-exported globally.

Tank space in the city state is being snapped up due to a rise in interest and profits from mixing cheap fuel supplies from Russia with shipments from other sources, according to an executive from a tank operator and a consultant who advises traders on the matter. That process can help to obscure the cargoes’ origins, they said.

Singapore hasn’t banned the import of Russian oil or petroleum products, although financial institutions based in the island state are prohibited from financing or dealing with Russian goods and companies. Singapore government agencies referred to past statements on the ban and price cap policy, without additional comments.

Still, the handling and trading of Russian fuel remains a sensitive issue in the region, with some buyers not wanting to be seen purchasing the cargoes.

Russian crude oil and fuel flows to Asia and the Middle East have surged since Moscow’s war in Ukraine prompted western buyers to turn away in retaliation. Such shipments have increasingly made their way to blending and redistribution hubs like Singapore and Fujairah in the United Arab Emirates where they can be co-mingled, repackaged and re-exported globally.

This trend of more Russia-to-Asia shipments and the growing role of hubs in their re-distribution may further intensify in the coming weeks as Europe prepares to roll out new sanctions on Russian petroleum products on Feb. 5. Oil market participants are keenly watching to see where Russian fuels such as gasoil, naphtha and fuel oil will find homes as many Asian nations aren’t taking a hard stance on sanctions.

“We have observed an increase in the number of inquiries of short/spot term storage in the period leading up to December,” a spokesperson for oil storage firm Advario Asia Pacific Pte. said via email. The company verifies the source of products to ensure compliance with Russian sanctions before accepting them, the person added.

Advario, Jurong Port, Horizon and Royal Vopak operate commercial tanks in Singapore. A six-month lease for Singapore fuel oil or crude oil storage rose by as much as 17%-20% in costs over the course of last year, said executives from tank operator firms.

Shiptracking data by Vortexa Ltd. showed that Singapore oil-receiving terminals took in more than double the volume of Russian naphtha and fuel oil in December 2022 as compared to a year ago. The city state received 2.6 million barrels of naphtha, nearly 40 times the volume taken a year earlier.

The increased Russian naphtha arriving in Singapore’s tanks are likely to be re-exported to markets in Northeast Asia, said Armaan Ashraf, global head of natural gas liquids at industry consultant FGE, based in Singapore. It’s likely that hubs such as Singapore and Fujairah will continue to play a role in re-branding these barrels for distribution to their respective regions, he added.

That’s due to the availability of very cheap supplies of Russian fuel oil and other products such as light cycle oil, he said. It greatly incentivizes the mixing of these highly-discounted varieties into blends that can be resold at a much higher price, thus encouraging traders and fuel suppliers to seek out onshore tanks or offshore floating storages for such plays.

According to Tan’s estimates, traders can enjoy a close to 20% profit margin from mixing Russian components with other grades to make a blended fuel oil product. This trend has been in place since October, and it’s more than the typical profit of between 10% and 12%, he added. Still, margins have room to increase if sellers get more desperate to offload their cargoes due to more trade restrictions.

“Some of this blended fuel may go into the bunker fuel in Singapore, or be traded off to nearby countries such as Indonesia and Vietnam,” said Tan.

--With assistance from Andrea Tan.