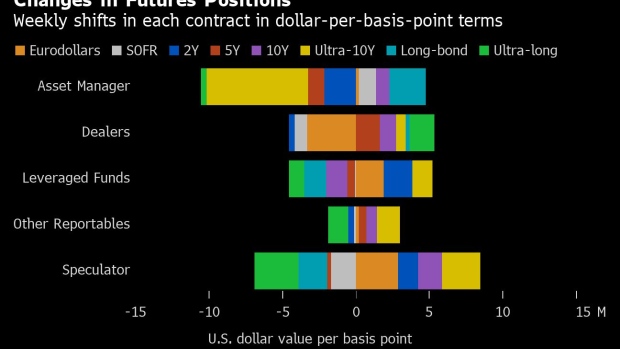 (Bloomberg) -- Rates traders are hastening to hedge their bets ahead of a critical inflation reading next week.

The latest round of positioning indicators suggest traders have lost their appetite for risky wagers on where US interest rates will be at year-end. JPMorgan Chase & Co.’s Treasury client survey showed neutral positioning was stuck near a five-year high, while recent futures data show asset managers and hedge funds were covering both long and short positions into the end of the year. The result should mean a cleaner positioning backdrop ahead of the November inflation report, expected on Dec. 13.

The following is a rundown of how positioning has unfolded in various markets:

The combined net short across SOFR, eurodollar and Treasury futures among hedge funds was cut by almost 11,000 10-year futures equivalents in the week up to Nov. 29. Short bias remains intact however at just over 5 million contracts. On the flip-side, asset managers were sellers on the week, liquidating long positions to the amount of 52,000 10-year note futures equivalents.

Most of the short covering among hedge funds was seen at the front-end of the curve, where net buying to almost $4 million per basis point in risk was seen on the week across eurodollar and two-year note futures. Asset managers aggressively covered long positions in ultra 10-year note contracts.

Skew Back to Neutral

After trading for an extended period toward puts, skew on 10-year note futures is closer to neutral, indicating traders are paying a diminishing premium for downside protection. Recent option highlights included one large put condor trade which surfaced in March options on Tuesday, targeting 3.75% and 3.90% 10-year yields.