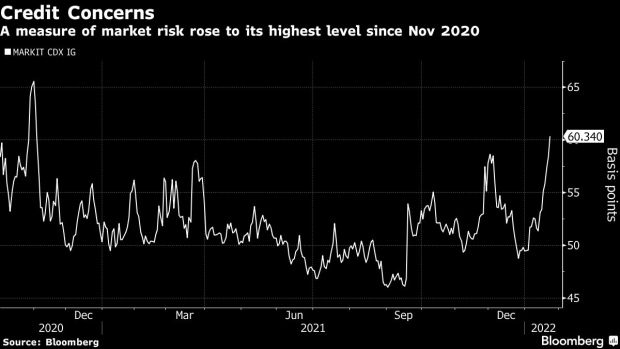 (Bloomberg) -- Gauges of U.S. credit risk jumped to their highest levels in over a year as U.S. equities plunged on Monday.

The cost of protecting a basket of investment-grade company debt against default rose as much as 2.4 basis points on Monday to 60.85, the highest since November 2020, according to the Markit CDX North America Investment Grade index. The CDX High Yield index price fell as much as 0.56 cents to 106.72, according to data compiled by Bloomberg.

Market participants on Monday had traded about two and a half times the usual volume of credit derivatives on investment-grade and high-yield indexes as of 1:50 p.m. in New York.

The rush to insure debt comes as investors across markets expect the Fed to confirm market-implied expectations rather than to alter them. The market currently sees a high probability the central bank will increase interest rates at the March 16 meeting. Goldman Sachs Group Inc. economists are anticipating four increases in 2021.

The S&P 500 fell as much as 4% on Monday, at its weakest point the biggest intraday decline since September 2020, while the yield on 10-year Treasuries declined almost five basis points to 1.71%.