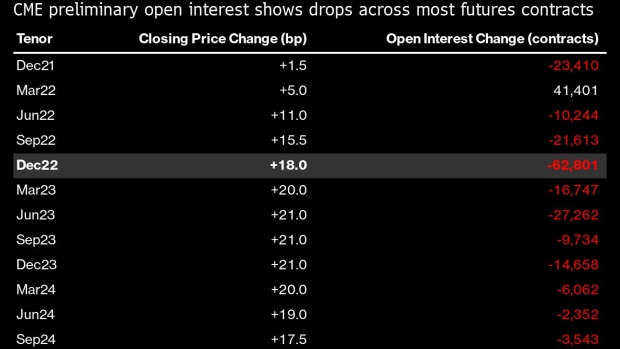 (Bloomberg) -- A mass exodus from bets on higher rates appears to have accelerated Friday’s explosive Treasury-market rally during a holiday-shortened session.

In eurodollar futures -- an analog of the Treasury yield curve -- early positioning data show there was wholesale dumping as initial reports about the omicron coronavirus variant threatened to knock down expectations for multiple Federal Reserve rate hikes next year. Staggering declines in open interest across a range of contracts in CME Group’s preliminary data suggest that exits from hawkish Fed bets helped fuel the extreme gains.

Open interest in the 12 quarterly eurodollar contracts expiring from December 2021 to September 2024 declined by a combined 103,400, equivalent to just over $100 billion in notional, or face, value. The changes included a 62,801 drop in the December 2022 contract as it was re-priced to anticipate two Fed rate hikes, from three.

Some of the drop in open interest likely reflects unwinding of eurodollar curve-steepening wagers, which had become popular on Wall Street. Steepeners recently recommended by Morgan Stanley (Sep22/Dec23) and Citigroup (Jun22/Jun25) flattened by a combined 11.5 basis points Friday based on end-of-day prices.

The rate-hike premium has started to claw its way back into the front-end of the curve Monday, although interest-rate swaps continue to price in two increases by the end of next year versus three at Thursday’s close. The first rate hike remains priced into the FOMC’s July 2022 meeting. In eurodollar futures, the December 2024/December 2025 12-month spread was nearly flat Monday, implying no rate-hike premium priced in beyond 2024.