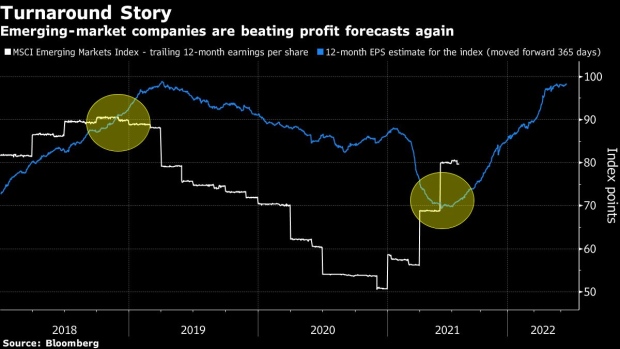 A man exchanges bolivars for pesos after the re-opening of the borders in Cucuta, Colombia. , Bloomberg

(Bloomberg) -- Some of the assets most exposed to fears around the spread of the delta variant are luring traders with tempting signals of strength and stability.

Emerging-market corporate earnings have outpaced estimates for the first time in 30 months amid an economic rebound in developing nations. Meanwhile, MSCI’s index of emerging currencies and stocks both remain up this year, defying the declines seen this month.

Analysts and investors from ING Bank NV and AllianceBernstein are betting on a return to strong risk appetite following the selloff, and see buying opportunities. With a Federal Reserve meeting on the horizon amid mounting inflation concerns in the world’s largest economy, that may seem like a tough wager. But many emerging-market watchers are ready to make that bet.

“The technical side is very, very supportive in the near term,” ING analyst Trieu Pham said in an interview from London. “We are still some way away from U.S. tapering. All this is good for risky assets and should be supportive for emerging markets.”

Pham added that in the short-term, he sees support for sovereign bonds from developing nations and carry bets.

The recent weakness in emerging-market assets has accompanied a flight to quality that drove U.S. Treasury yields below 1.3%. MSCI’s emerging equity index has crumbled, falling 4.6% so far this month. Still, the index is now floating near oversold territory and has held up against its 200-day moving average.

As investor attention returns to the growth story and fears of the delta variant are put aside, emerging economies may be primed for a takeoff. U.S. growth has been slowing, with Wall Street strategists concerned that economic growth may have peaked in the second quarter. And according to Bloomberg surveys, emerging-market growth is expected to outpace the developed world, 6.6% to 5.4% respectively.

“Equity investors have favored the U.S. over the last month,” said Morgan Harting, a portfolio manager at AllianceBernstein in New York. “Emerging markets still look to me like that place where investors will find the best-priced earnings growth, and I expect that the continuing rapid pace of vaccination across many EM countries will increase conviction.”

Meanwhile, even some of the most punished assets may be a solid bet coming up. BBVA strategist Danny Fang says that he’s bullish on Latin American currencies, despite them being among the hardest-hit during the selloff.

“I like Latin American currencies,” said Fang in an interview from New York. “The Colombian peso got close to 3,900, at it seems to be a pretty decent resistance, so I think the peso has potential to recover.”

In particular, he says the rates story looks attractive in Mexico and Brazil, though domestic political uncertainty could translate into more volatility in the currency.