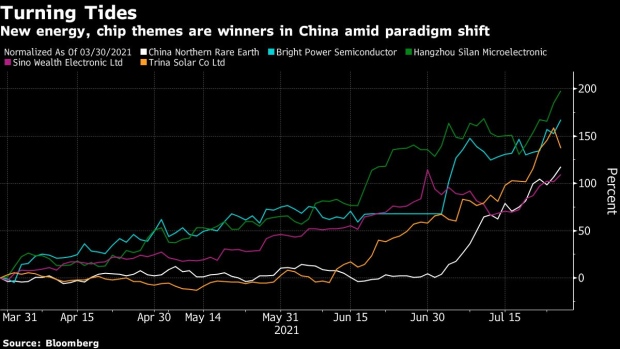 Wind turbines manufactured by Shanghai Electric Group Co. stand at a wind farm operated by China Huaneng Group in this aerial photograph taken in Qidong, China, on Thursday, June 7, 2018. China, the world's largest wind power producer, is considering setting a national target to reduce average wind curtailment rates to less than 10 percent next year and to about 5 percent by 2020, according to an April 12 government policy proposal document. , Bloomberg

(Bloomberg) -- Investors are quickly revising their playbooks in China’s $12 trillion equity market as Beijing widens a clampdown on businesses it blames for exacerbating inequality and increasing financial risk.

Traders are now scrutinizing the stocks they hold for whether they match the party line, amid education sector reforms and Beijing’s tighter oversight on everything from internet and real-estate firms to food delivery platforms.

Monday’s stock rout, and continued declines Tuesday, have demonstrated just how severe the fear is. The Communist Party is targeting the so-called “three big mountains” of unaffordable education, health care and housing -- obstacles that it sees as having exacerbated a wealth gap, squeezed people’s livelihoods and deterred people from starting families.

“The winds have changed,” said Yu Dingheng, managing director at Shenzhen Flying Tiger Investment & Management Co. “Any industry that drives growth through innovation or technology that can be exported, will be supported. That includes semiconductors, electric vehicles, solar and defense sectors,” he said.

Here are some of the sectors benefiting from China’s new priorities:

Hangzhou Silan Microelectronics Co. is up 165% this year while Shenzhen Fine Made Electronics Group Co. has seen its stock price soar more than 380%. On Tuesday, Semiconductor Manufacturing International Corp. jumped 13% in Shanghai after its Hong Kong shares bucked steep declines in the Hang Seng Index Monday. An ETF tracking semiconductors in China has climbed 52% from a May low.

Food security is another aspect of China’s self-sufficiency drive, boosting seed producers and agricultural firms. Yuan Longping High-tech Agriculture Co. is up nearly 20% in the past month.

Carbon neutral has been one of the most resilient investment themes this year, as China rolls out policies to help achieve its task of reaching net-zero emissions in 2060. That has benefited stocks in solar and wind firms, electric vehicle makers, parts suppliers and cyclicals such as lithium and rare earths used in batteries.

More than half of the gains in the tech-heavy ChiNext Index this year were driven by three renewable energy firms, while Contemporary Amperex Technology Co. has nearly doubled from a low in March. Six out of the top ten performers on the CSI 300 Index in the past three months are related to the carbon-neutral trade, rising at least 68% in that time.

Defense stocks could see sustained upward trajectory, says Huaxi Securities, citing China’s rising investment in military equipment. Companies making aerospace materials and parts, as well as firms that play a role in information technology and intelligence in national defense, could be the biggest beneficiaries. Beijing Cisri-Gaona Materials & Technology Co. climbed 75% since an April trough. An ETF tracking defense shares has rebounded 24% from a low in May.