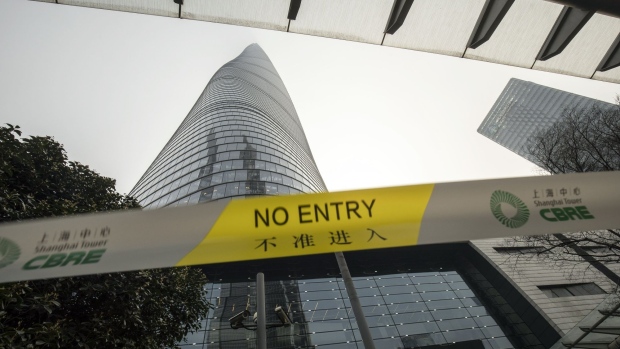 (Bloomberg) -- As China’s major financial centers confront their worst Covid outbreaks to date, many fund managers are rolling out sleeping bags on trading floors across Shanghai and Shenzhen.

Traders are volunteering to take turns camping out in their offices to avoid restrictions sweeping through the cities at a time when Chinese capital markets are experiencing the biggest bout of volatility since mid-2020.

With Shanghai becoming one of the nation’s epicenters for new coronavirus infections, employers are preparing for the possibility of sudden lockdowns that could forcibly quarantine traders at homes or work for days or even weeks. That means making sure workers have enough provisions on hand in case they get stuck in the office. At AXA SPDB Investment Managers Co., for example, staff is being supplied with airbeds, instant noodles and emergency kits.

“We’re on the front line of investing here and we need faster and more effective in-person communications,” said Alex Wang, who along with a dozen of his colleagues at another fund company volunteered to take turns living out of their Shanghai office over the past two weeks with the company’s consent.

The Shanghai city government has urged people in its main financial and business districts to work from home as it implements residential and office lockdowns as well as mass testing to battle the nation’s worst Covid outbreak since the pandemic emerged in early 2020. Nearly 400 cases were reported over the past two days in Pudong district, home to a bevy of domestic and international banks and the Shanghai Stock Exchange. Nationally, there were almost 4,600 cases on Monday, with a fifth of that coming from Shanghai.

While some firms are allowing workers to return to the office if they can present negative nucleic test results, usually taken within 48 hours, other companies simply can’t because their buildings have been locked down indefinitely for Covid testing, similar to what happened last week at the Shanghai Tower, where firms like JPMorgan Chase & Co. and Fitch Ratings Inc. have offices.

“With everyone staying together in the office, we can be more focused than ever, especially at a time when the market is in a downturn,” said Wang, who preferred that his company not be named due to sensitivities over the government’s strategy to stamp out the virus.

China’s stock market experienced one of its most volatile periods in decades last week, with record plunges followed by dizzying reversals after Beijing made a sweeping set of promises to stabilize equities. A two-day rebound restored $1.3 trillion of market value in Hong Kong and the mainland, though both markets are still down sharply this year overall.

Wang’s company is just one of many that are rolling out contingency plans across China to make sure that they can continue to place orders and execute trades with minimal disruption. Fund houses in Shenzhen, which implemented a sudden, full lockdown for about a week earlier in March to cope with a Covid outbreak, have also taken similar action.

While most Chinese employers are encouraging staffers to conduct business from home as much as possible given the spread of Covid-19, some workers complain of compliance issues, spotty internet connections and other distractions.

Wayne, a Shanghai-based fund manager, said that he felt helpless working from home and that placing orders outside of the office weren’t permitted due to compliance issues. He declined to provide his surname because he wasn’t in a position to comment on anything related to the government’s Covid policies.

China has been sticking to a so-called Covid Zero policy that’s leaving it increasingly isolated as countries around the world learn to live with variants such as Omicron.

ABC-CA fund managers are bringing suitcases packed with clothes and essentials to work since the firm allowed flexible work arrangements last week. The company has provisions such as cots, sleeping bags and personal hygiene products in case of emergencies like a building lockdown, according to a statement on its wechat account.

Ma Yijun, a fund manager with ABC-CA, said he hasn’t left his office since last Thursday and he’s unsure when he can return home to his family.

“I chose to stay because fewer and fewer people are able to leave their homes with more compounds being placed under lockdown,” he said. “But it’s a choice that anyone at the company would make at this trying time, as we want to ensure smooth operations of our funds.”