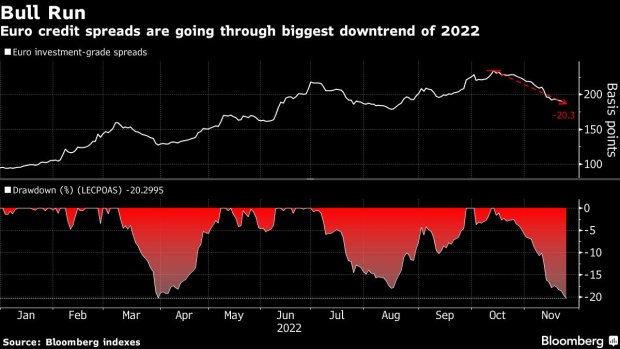 So strong is that bullish sentiment, in fact, that traders bidding up prices on the bonds have helped drive down their yield premium over government debt by the most in two years.

These gains form part of a broader rally in global credit markets that’s been driven by optimism that both inflation and central-bank rate increases are beginning to slow. But in Europe, where even the strongest corporate borrowers -- names like Volkswagen AG and TotalEnergies SA -- were battered in the bond market earlier this year as Russia’s invasion of Ukraine throttled the region’s economy, the rebound is more pronounced.

Euro investment-grade debt spreads have tightened by 47 basis points since mid-October to 187 basis points. While spreads are still wide and reflect a market full of skepticism about the health of the European economy, the size of the drawdown ranks as the biggest since 2020, according to data compiled by Bloomberg.

“The worst in terms of performance should be over and current yields in IG are very attractive,” said Matthias Schell, a credit strategist at Landesbank Baden-Wuerttemberg. “We expect that investors will put more money in credit.”

Here’s a snapshot of strategist forecasts so far:

There are early signs that money is flowing back into the market as well. High-grade funds have recorded four weeks of inflows, according to Bank of America Corp. strategists, citing EPFR Global data. Junk bond funds, on the other hand, have seen 13 weeks of outflows.

To be sure, traders have been early before with bets on a central bank pivot. With Europe tipping closer to a recession, there’s a risk that any market optimism will be proven wrong.

Analysts at S&P Global predicted that “painful times” are ahead for weaker borrowers. They pointed to a stress test of 20,000 companies showing that a combination of weaker growth, high inflation and interest spreads would cause the proportion of potential defaulters to reach 17% by 2023, up from 7% in 2021.

For analysts, like Peter Kaufmann at Erste Group Bank AG, valuations are already taking the bad news into account. The yield of euro investment-grade bonds stands at 3.93%, compared with a five-year average of 1%, based on Bloomberg indexes.

“Much of the negative developments have already been priced in,” he said.