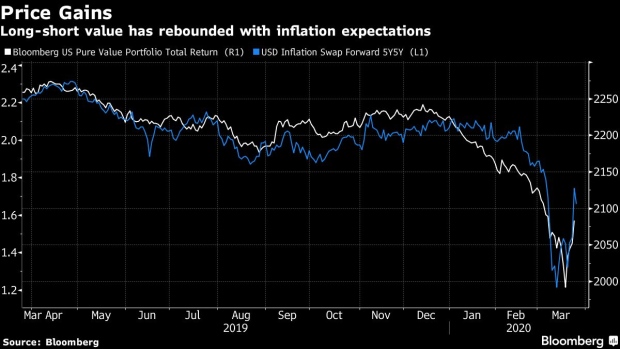 (Bloomberg) -- It’s too early to say whether the sell-off is over, the stimulus is working or what the ultimate economic toll of the coronavirus will be.

But perhaps for the first time since this stock meltdown, investors have the breathing room to try to figure it all out.

Tuesday’s epic stimulus-induced rebound and easing volatility in bonds and currencies might kick off a new phase of the crisis for money managers, where the rush to liquidate exposures across the board eases.

In its place: A hunt for undervalued investing strategies over defense at all costs. Bets on corporate earnings over the medium-term. All with a calmer disposition after the waves of panic selling.

“People are beginning, at the margin, to look beyond the short term,” said Matthew Yeates, a quantitative fund manager at Seven Investment Management. “Certainly a lot of the stimulus should be inflationary and that is likely having a feed into underlying factor performance.”

Unprecedented measures from the Federal Reserve to support the economy, plus the gradual progress of law makers toward a more than $2 trillion stimulus package, are feeding optimism.

The beleaguered value trade posted its best four-day run this century as market-derived inflation expectations edged up. Volatile shares are now beating steady ones. Even much-hated highly leveraged stocks are rebounding versus the opposite cohort.

Yeates likes these kind of signals from the factor-investing world. They show that after the virus-induced shock and the liquidity squeeze, markets are moving into a less-stressed stage where investors price in the economic damage after accounting for the stimulative offset.

“While it is still too soon to call the ultimate trough in equities more broadly, it is encouraging that the indiscriminate fire sale, panic-driven selling appears to be abating,” BCA Research strategists Mathieu Savary and Aneel Samra wrote in a note.

Cyclicals, small caps and volatile shares are all finding favor while one measure of investor buying interest has registered its highest reading ever.

A portfolio that bets on hotels and cruise lines and against food and consumer staples has returned 23% since last Wednesday, Evercore ISI said in a note on Tuesday.

That all speaks to mean reversion, whereby extreme moves tend to return to their average, rather than any fundamental optimism about corporate leverage or beleagured cyclical business like hotels and cruise ships.

“Mean-reversion signals have been triggered across equities and credit,” JPMorgan Chase & Co. strategists led by John Normand and Federico Manicardi wrote in a note on Tuesday. “Quick deratings combined with huge stimulus may explain why many investors are somewhat downplaying the unprecedented nature of the shock and instead asking when they should buy depressed markets.”

Still, short-covering has a lot to do with all this. A Goldman Sachs Group Inc. basket of the most-shorted stocks has gained 15% over the past week, compared with 3% for the underlying Russell 3000.

And with quant and discretionary funds alike capitulating, they’re closing both long and short positions, one reason for the reversal in factor performance that’s proved kinder to the riskier strategies.

All that helps explain why as long as shares keep swinging, Los Angeles Capital Management, a $27 billion quant firm, is sticking to its defensive tilt. It still favors high-growth, high-quality names, according to Chief Investment Officer Hal Reynolds.

“Our models suggest that default risk is not yet subsiding,” he wrote in an email. “As credit spreads begin to tighten and interest rates stabilize, most likely following news that the virus in under control, business activity will begin to pick up which will be generally favorable to riskier assets which have been punished.”