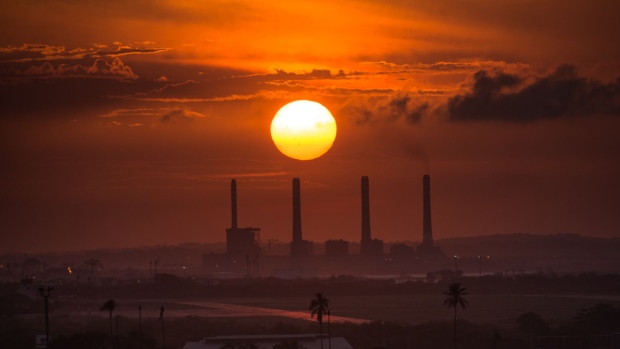 (Bloomberg) -- Just as the regime of President Nicolas Maduro seemed to be running out of friends, an old trading partner may come to the rescue.

Vitol Group, the world’s biggest independent oil trader, is negotiating a purchase of Venezuelan crude, according to documents and emails reviewed by Bloomberg. This would be the first time Vitol dealt with the Latin American nation’s oil after the U.S. ratcheted up sanctions in January 2019 in a bid to oust Maduro.

The proposed deal would be for a cargo of about 500,000 barrels, which Vitol may take it to its ATPC refinery in Antwerp, the documents show. The Rotterdam-based energy trader is considering buying the oil from Libre Abordo SA de CV, a little-known Mexican company that says it’s providing humanitarian aid to Caracas in exchange for crude. That would allow Vitol to steer clear of the U.S. sanctions.

Merchants can strike lucrative deals from doing business with countries like oil-rich Venezuela, troubled by economic collapse and sanctions that have undercut its ability to sell the commodity that is its main source of income. Unable to sell its oil and navigate the global financial system, Venezuela has resorted to cashless barter deals that bring food and gasoline.

“Vitol operates its business in full compliance with all relevant laws and regulations, including sanctions relating to Venezuela,” the company said in a statement. “Vitol would only consider receiving product of Venezuelan origin if it had the relevant assurances that it could do so lawfully.”

The proposed deal was being discussed by a Vitol trader based in London, the documents show. The cargo was expected to be priced at $15.50 a barrel below Dated Brent benchmark, with payment to be made in euros or Mexican pesos against invoices of humanitarian goods, one document shows. In another document, Vitol says that if all goes well the company “could look at additional volume going forward.”

OPEC founding member Venezuela, once Latin America’s largest oil producer, now churns out less oil than North Dakota. Plagued by widespread corruption, triple-digit inflation and a refugee crisis almost as bad as war-stricken Syria, the country struggles to sell its oil after sanctions cut off access to the U.S., the biggest destination for its crude.

After China’s biggest energy company CNPC stopped buying oil from Caracas, Venezuela relied heavily on Russia to peddle cargoes. But once the U.S. imposed sanctions on Rosneft Trading SA (RTSA), the Russian company withdrew from the Venezuelan market. Cargo loadings of crude and deliveries of gasoline to Maduro by Rosneft PJSC’s subsidiaries RTSA and TNK Trading International SA fell to zero, according to shipping data compiled by Bloomberg. That’s when little known Libre Abordo stepped up, buying most of the available cargoes.

Founded more than a half century ago, Vitol has grown from a small Dutch fuels merchant to a dominant global energy trader with major trading offices in London, Geneva, Houston and Singapore. Before the most recent oil price shock and plunge in demand due to the Coronavirus pandemic, it was handling about 8 million barrels of crude and petroleum products a day, or about 8% of global demand.

--With assistance from Andy Hoffman.

To contact the editors responsible for this story: David Marino at dmarino4@bloomberg.net, Catherine Traywick