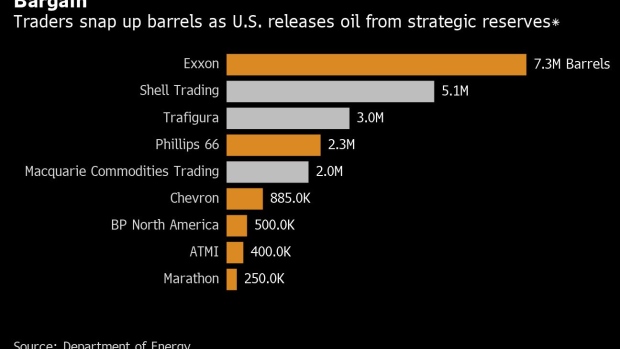 (Bloomberg) -- The release of oil from U.S. strategic reserves was a boon for trading houses, many of which participated in the government program for the first time in years thanks to a market structure that uniquely benefits them.

Trafigura Group and Macquarie Group were among the traders awarded oil from the Strategic Petroleum Reserve in an exchange agreement with the Department of Energy. The traders are set to take advantage of so-called backwardation, a price structure where the cost of oil for immediate delivery is higher than in the future.

The Biden Administration released oil from the strategic reserve in a bid to lower surging fuel costs that are adding to the nation’s worst bout of inflation in nearly 40 years. Gasoline has risen to the highest since 2014 as crude prices rose by 55% last year, prompting Biden to coordinate an unprecedented release of crude with other nations like India and China. The release accounts for about 6 days of supply to U.S. Gulf coast refiners.

The trading firms can sell the oil immediately to refiners for current prices -- West Texas Intermediate crude is trading in the high $80s, and are expected to pay back in some cases by Sept. 2024, currently priced about $20 a barrel less on the forward curve. They can lock in profits by buying call options that will give them the right to buy WTI in the high $60s when it’s time to return the crude, according to traders.

The Department of Energy offered to loan fuelmakers 32 million barrels, on condition they pay it back in oil by 2024. So far, 68% of the total offered was awarded, where at least half was taken by trading houses. The loan is part of a 50 million barrel release.

The trading houses set up supply agreements with refiners when the crude release was announced, according to people familiar with the matter. Some refiners likely didn’t take SPR crude directly because it would be cost prohibitive to provide the necessary letter of credit to cover the entire two-year period to return the oil.

Other trading companies and refineries chose not to participate in the exchange because it would mean spending extra for blending to meet quality specifications when they repay the oil, according to traders. Blending can be costly because the caverns historically have held a mix of local and foreign crude grades. Borrowers would also have to secure storage tanks and other logistics to eventually return the crude to the government, eating into potential profits.

Trafigura and Macquarie both declined to comment for this story.