As many Canadians prepare to change their routines with New Year’s resolutions, some will shift their sights to achieving a greater work-life balance.

However, a researcher from the University of Toronto told BNN on Tuesday that the idea of work-life balance itself may be unattainable.

“Our research shows when people think about balance, they think about work on one side of a scale -- with its demands, time, attention, energy -- and the other side should be equally balanced. That’s often not feasible or realistic,” University of Toronto Canada research Chair Scott Schieman told BNN. “So what it does is it makes people feel like the problems are more personal rather than putting them in a more strategic position and a more realistic position to negotiate their needs in terms of work and family.”

One of the keys to making the work-life balance goal more realistic, according to Schieman, is shifting the idea away from a perfect balance between personal time and workplace obligation and more toward finding a better fit for each within one’s own life.

“If you’re thinking about New Year’s resolutions, people look for meaning in their [lives] and one of the ways they look for meaning is they identify the main source of pleasures and rewards in their roles but also how the stressors and demands of those roles take a toll on them,” Schieman said. 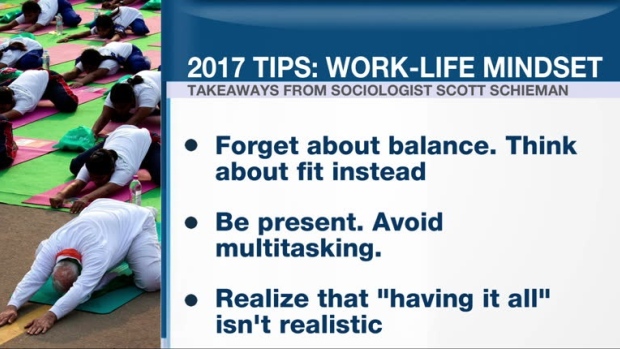 “When people switch to the idea of fit, they get themselves out of the mindset that’s quite harmful which is: ‘I need to balance everything and I need to feel balanced.’ Often - if you’re working full-time or working more than full-time – that’s just not feasible.”

In other words, Schieman says finding better strategic use of the time devoted to one or the other is more beneficial to the idea of balance than trying to match work time and home time evenly.

Working from home can also be a mixed blessing for achieving better fit, according to Schieman. While it offers more physical time with partners, he argues it also divides people’s attention, resulting in less quality time with partners and children.

“I think one of the main ways is that people are trying to multi-task more and using the communication technologies, using the ‘tele-work’, to be at home usually and working. While there are a lot of upsides to that, be mindful of the downsides.”