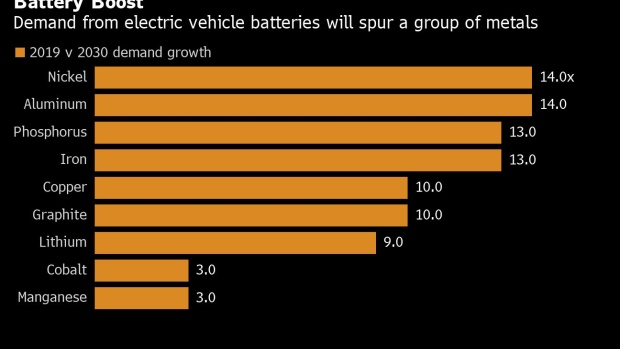 (Bloomberg) -- Just weeks after a novel production method upended the nickel market, two of the top names in the battery-supply chain made a play that suggests the world’s worries over sourcing cheap, clean supplies of the metal are far from over.

Commodity trader Trafigura Group and Elon Musk’s Tesla Inc. signed a deal in late March to enter the Goro mine in New Caledonia, part of a group that will take the operation off the hands of Vale SA. The transaction wasn’t a surprise, with Vale in talks to offload the under-performing mine for months. But the deal’s timing was telling.

Earlier the same month, China’s Tsingshan Group triggered the biggest two-day nickel rout in a decade with its plans to make battery-grade metal from materials previously reserved only for stainless steel, potentially flooding the market. Wall Street banks lowered their nickel forecasts after futures plunged from about $19,000 a ton to $16,000.

The Goro deal shows Trafigura and Tesla don’t see Tsingshan’s new processing method as a panacea for meeting surging demand for nickel used in the batteries that are needed to help wean the world off fossil fuels. Carmarkers’ preference for cleaner sources of aluminum and cobalt suggest they’ll follow a similar line on nickel, said Socrates Economou, head of nickel and cobalt trading at Trafigura.

“You need higher prices of $19,000 per ton imminently to incentivize the correct nickel output that the market needs,” Economou said in an interview. While there are various routes to produce battery-grade nickel, “you need higher prices in order to support these missions. And there’s no other solution around today.”

Trafigura, the biggest metals trader after Glencore Plc, is getting a 19% equity stake at Goro as well as an offtake arrangement. Tesla will also have the right to some of the metal as Musk looks to scale up battery-cell production.

The mine was bought online late and over-budget in 2010 and never reached more than 70% of capacity, showing the difficulties producing nickel from laterite deposits using high pressure acid leach process. Still, Vale didn’t sever its ties altogether, retaining a right to some of the metal.

The new owners will make the asset work as the electro-mobility transformation gains momentum, Economou said. “All the pieces have come together now.”

Nickel is already one of the most carbon-intensive metals to produce. Now Tsingshan has come up with a way of using a type of low-grade ferronickel called nickel pig iron in its plants in Indonesia to produce metal suitable for batteries, offsetting the carbon intensity with renewable energy. Some analysts and investors, including Trafigura, have questioned whether the process will be accepted by increasingly eco-conscious automakers.

“The technology is definitely real, but does not meet ESG standards,” said Jon Lamb, portfolio manager at metals and mining investment firm Orion Resource Partners. “As consumers are focused on the lifecycle carbon intensity of their supply chains it is difficult to see how this production would earn a spot in these supply chains.”

“The game itself is actually how do we put nickel units into a growing nickel market,” he said. “There will be more Tsingshans, there’ll be more people with breakthrough technology that will be able to create battery-grade nickel feed.”

According to mining magnate Robert Friedland, there are a lot of “fantasies” about where battery-grade nickel is going to come from.

“The automobile industry is not going to nuke hundreds of thousands of acres of tropical jungle in Indonesia and dump the tailings in the ocean and try to convert ferronickel into batteries,” he said during an industry event last week. “That’s disinformation or whistling in the dark.”