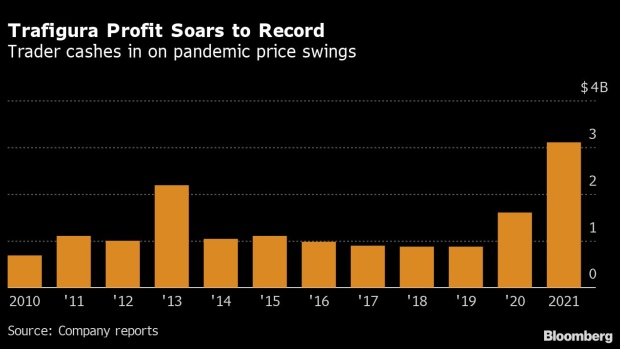 (Bloomberg) -- Trafigura Group racked up its best-ever annual profit as the commodities trader cashed in on dramatic raw materials price swings caused by the pandemic.

The second-biggest oil and metals merchant posted net income of $3.1 billion for its fiscal year ended Sept. 30, a 94% increase from the year before, as volumes soared along with price volatility.

The record result shows that commodities traders continue to be among the biggest beneficiaries of the disruptions prompted by the global health crisis. The firms are making massive gains exploiting price differences between geographic regions, caused by wide swings in demand amid lockdowns and other measures aimed at stopping the spread of the virus.

Trafigura, based in Singapore but with its top executives ensconced in Geneva, saw its equity value soar 36% from 2020 to $10.6 billion, the first time in the firm’s 28-year history it has topped $10 billion.

That came even as the company lavished its senior traders and executives with $1.1 billion in dividends and share buybacks, the principal way it rewards its top employees. The payout represented an 87% increase from the $586 million it paid out the year before.

Oil trading volumes surged 25% from the year before to average about 7 million barrels a day. That just shy of the 7.1 million barrels that Vitol Group, the biggest independent oil trader, handled in 2020.

The record results were dampened, however, by continuing challenges at some of Trafigura’s industrial mining and production assets. Impairments related to its Puma Energy fuel station business and its zinc smelter and mining unit Nyrstar contributed a loss of $709 million from those operations, the company said.

Debt also soared as the firm traded more and invested in new projects and supply deals. Total debt rose to $45.2 billion from $32.9 billion the year before.