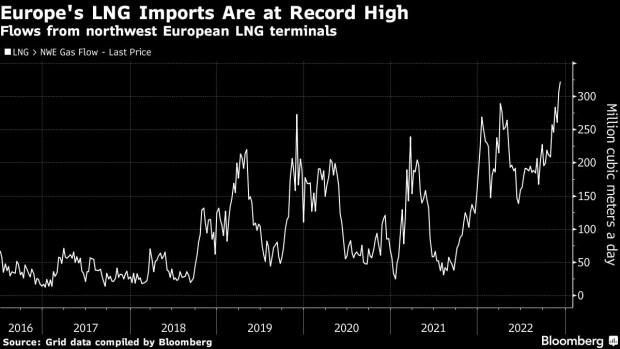 (Bloomberg) -- Europe will need to import “huge volumes” of liquefied natural gas next year to make up for severely curtailed Russian flows, according to commodities giant Trafigura Group.

To attract LNG away from other regions, gas prices in Europe will need to remain elevated, the trading house said in its annual results. Security of supply will remain an issue beyond next winter.

“We expect gas and LNG markets to remain volatile,” Trafigura said. “While Europe should avoid a blackout this winter by drawing on inventories and cutting demand, it will need to import huge volumes of LNG in 2023 given the massive reduction in flows from Russia.”

LNG imports are already at record-high levels, helping Europeans to heat their homes after Russia curbed pipeline-gas supply to a fraction of normal levels. US LNG has filled most of the gaps, with more import terminals set to open across Europe over the coming year.

“It is destination-flexible US LNG that has answered the call,” Kristy Kramer, vice president for gas and LNG research at Wood Mackenzie Ltd., said in a note Thursday. Two-thirds of all US LNG cargoes will land in Europe this year, and more would come if it were not for capacity limits at import terminals.

For LNG, Trafigura traded 13 million metric tons of oil equivalent in 2022, down from 14 million tons a year earlier. Natural gas volumes remained little changed at 23.7 million tons. As well as delivering the gas, the trading house also put the fuel into leased storage ahead of the winter.

Liquidity in physical and financial markets was reduced after futures exchanges and clearing brokers raised margin requirements,“substantially” increasing the cost of moving cargoes, Trafigura said. An explosion at the Freeport LNG terminal in the US, where Trafigura has an offtake agreement, also “removed LNG and significant flexibility from our portfolio at a time when the market needed them most,” it said.

The restart of Freeport LNG has been repeatedly delayed, with the most recent timeline for operations to resume at the end of the year.

“However the size and scale of our operations meant that we were able to substantially mitigate any issues for our end buyers relating to the lost Freeport volumes and we continued to ensure safe and reliable LNG supply,” Trafigura said.