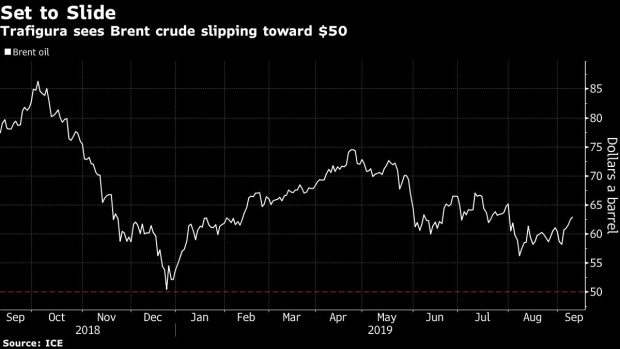 (Bloomberg) -- Brent crude could slump toward a level it hasn’t seen since December 2018 prompting deeper output cuts from OPEC and its allies, according to one of world’s biggest oil traders.

Macroeconomic headwinds and rising supply will chart a course toward $50 a barrel for the global benchmark over the next six months, which is about 20% lower than where it’s currently, Ben Luckock, Trafigura Beheer BV’s co-head of global oil trading, said during an interview in Singapore. It’s likely to return to a range of $70 to $75 in the medium to long-term, a level cheap enough for consumers but valuable enough to make producers money, he said.

But for the next six months at least, prices are likely to drift lower before spurring OPEC+ to cut further and U.S. shale drillers to reduce spending, slowing down one of the fastest-growing sources of output, he said. Brent crude has averaged about $65 a barrel this year, and was last below $51 in late December.

A lower price “is one of the few things that either galvanizes OPEC, makes it harder for shale to perform, or stimulates demand,” Luckock said at the trading house’s office in the city state. “I can see us drifting toward $50 in the short term, but I think the medium to long term price is $70 to $75.”

The Organization of Petroleum Exporting Countries and its allies including Russia have been working since 2016 to balance global markets through output cuts, but at current price levels, Trafigura sees the coalition fraying. Iraq has shunned its commitments, while stalwarts like Saudi Arabia and Kuwait are seeking to restart a 500,000-barrel-a-day neutral zone field next year, said Saad Rahim, the trading house’s chief strategist and global head of research.

“We don’t think the current level of OPEC cuts and compliance is actually enough to make oil go higher,” Luckock said. Still, lower prices could rekindle the group’s urgency to work together and even deepen curbs, he added.

Sanford C. Bernstein & Co. estimates that OPEC needs to deepen current output cuts by 1 million barrels a day in 2020 to defend prices at $60 a barrel in the face of rising non-OPEC supply. On the contrary, the Oxford Institute for Energy Studies said that rising supply may dissuade the Saudis from seeking deeper cuts for fear of those reductions failing.

Trafigura is shipping U.S. shale from its facility in Corpus Christi and buyers in Europe and Asia have begun asking if they can purchase the crude via long-term deals, Luckock said. The group is bullish on the Permian Basin and is looking at expanding its export project by building an offshore buoy that would allow direct loading onto the world’s biggest crude tankers.

Still, Luckock thinks the oil industry is relying too much on continued U.S. shale growth to meet demand, and isn’t investing in more expensive, long-term projects like deepwater wells.

“In the 18 month- to 5-year term, you get back into the story where you only have one solver for global demand in U.S. shale, there’s underinvestment in deepwater, demand could recover, and you can see how you could return back to a more normalized price,” he said.

To contact the editors responsible for this story: Serene Cheong at scheong20@bloomberg.net, Ben Sharples, Alexander Kwiatkowski