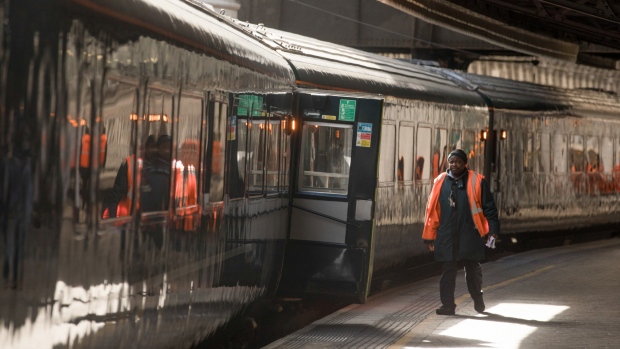 An employee walks alongside a Great Western Railway train, operated by FirstGroup Plc, at London Paddington railway station in London, U.K., on Monday, April 16, 2018. British train and bus operator FirstGroup Plc said it rejected an "opportunistic" takeover proposal that private-equity firm Apollo Management made as the company struggles with under-performing rail routes in the U.K. and competition from discount airlines in the U.S. , Bloomberg

(Bloomberg) -- Trainline Plc surged as much as 9% during early trading on Thursday after the company said strong U.K. consumer sales were behind its decision to raise guidance for the 2020 financial year.

Annual revenue growth for 2020 would be in the low to mid 20% range, Trainline said in a trading update on Thursday. U.K. net consumer ticket sales increased 25% year-on-year for the six months ended Aug. 31, while new customer acquisition boosted international sales 52% in the period.

“Our performance is underpinned by the long-term shift of customers from offline to online, the successful rollout of eTicketing and our continued focus on making rail and coach travel easier for customers worldwide,” Chief Executive Officer Clare Gilmartin said in a statement.

Trainline works with about 220 rail and coach companies to offer customers fares for travel in 45 countries, mainly in Europe and Asia. It increased its reach across Europe in 2016 with the acquisition of Captain Train, one of the most popular continental rail ticket re-sellers.

The company’s trading debut in June was the second-largest in the U.K. this year after Network International’s April IPO. Trainline had a market value of 2.2 billion pounds as of Wednesday’s close.

The London-based firm also announced on Thursday that Brian McBride, its deputy chairman, will replace Doug McCallum as an independent non-executive chairman as of Nov. 5. Trainline will also publish its interim results for the first half of the financial year the same day.

To contact the editors responsible for this story: Giles Turner at gturner35@bloomberg.net, Chris Kay, Adam Blenford