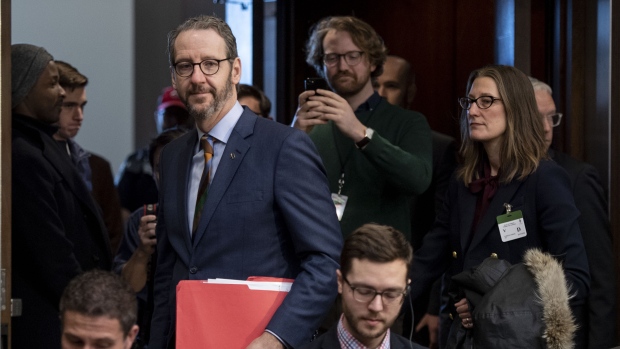 Gerald Butts, former principal secretary to Prime Minister Justin Trudeau, arrives to appear before the Standing Committee on Justice and Human Rights regarding the SNC Lavalin Affair, on Parliament Hill in Ottawa on Wednesday, March 6, 2019. , THE CANADIAN PRESS/Justin Tang

Gerald Butts is testifying at the House of Commons justice committee, to tell what he describes as a “very different” version of events from former justice minister Jody Wilson-Raybould’s explosive testimony last month. She alleged she was subjected to inappropriate pressure – as well as veiled threats about being removed as justice minister and attorney general -- to intervene to halt the criminal prosecution of SNC on bribery and fraud charges related to contracts in Libya.

Butts said he and others tried only to persuade Wilson-Raybould to seek independent legal advice on the matter, given the potential impact on SNC’s 9,000 employees in Canada and the fact that remediation agreements are a new feature in Canadian law.

“We also made clear that if the attorney general accepted our proposal and took external advice, she was equally free to reject or accept that advice. It was not about second guessing the decision. It was about ensuring that the attorney general was making her decision with the absolute best evidence possible,” Butts said during his testimony Wednesday.

“Fresh in our minds was a recent Federal Court of Appeal decision that had found that the government had not concluded consultations sufficiently in connection with the [Trans Mountain expansion] pipeline.”

Ottawa bought Trans Mountain last August after Kinder Morgan Canada became concerned about several legal challenges. One of those was successful last summer, when the Federal Court of Appeal tore up cabinet approval for the expansion project on the grounds of insufficient environmental and Indigenous consultations.