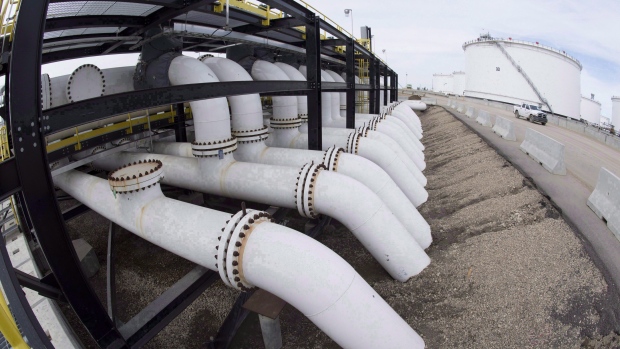 VANCOUVER -- Here are some key dates in the history of the Trans Mountain pipeline and Kinder Morgan Canada's efforts to expand its capacity:

October 1953: The Trans Mountain pipeline begins shipping oil with an initial capacity of 150,000 barrels per day. The project features four pump stations along its 1,150-kilometre route and a marine dock that connects loading facilities on the east side of Edmonton with ocean tankers in Burnaby, B.C.

1957: Pipeline capacity is expanded via the construction of a 160-kilometre pipeline loop. The Westridge Marine Terminal is built and commissioned in Burnaby, B.C.

Feb. 21, 2012: Kinder Morgan says it wants to expand the Trans Mountain pipeline after receiving support from oil shippers and will begin public consultations.

Dec. 16, 2013: An application is made to the National Energy Board (NEB) to expand the Trans Mountain pipeline. Construction is proposed to begin in 2017, with the aim of having oil flow through the expansion by December 2019.

November 2014: More than 100 people are arrested after they camp out in a conservation area on Burnaby Mountain, east of Vancouver, to block crews from conducting drilling and survey work related to the pipeline expansion. Most of the charges are later dropped.

August 2015: The NEB postpones public hearings after striking from the record economic evidence prepared by a Kinder Morgan consultant who was to begin working for the regulator.

Jan. 12, 2016: Alberta Premier Rachel Notley says in a written submission to the NEB that the Trans Mountain pipeline expansion is in the best interests of both Alberta and Canada.

Jan. 27, 2016: The federal Liberal government says pipeline projects such as the Trans Mountain expansion will now be assessed in part on the greenhouse gas emissions produced in the extraction and processing of the oil they carry. Proponents will also be required to improve consultations with First Nations.

May 17, 2016: Ottawa appoints a three-member panel to conduct an environmental review of the Trans Mountain expansion project.

May 29, 2016: The NEB recommends approval of the pipeline, subject to 157 conditions, concluding that it is in the public interest.

Jan. 11, 2017: B.C. Premier Christy Clark announces her support for the project, saying Kinder Morgan has met five government conditions including a revenue-sharing agreement worth up to $1 billion.

May 15, 2017: The Federal Court of Appeal grants Notley's government intervener status in a lawsuit filed by municipalities and First Nations against the project.

May 25, 2017: Kinder Morgan makes its final investment decision to proceed with the development, now estimated to cost $7.4 billion, subject to the successful public offering of Kinder Morgan Canada.

May 29, 2017: The B.C. NDP and Greens agree to form a coalition to topple the Liberal party, which won a minority government in an election earlier in the month. The parties agree to "immediately employ every tool available" to stop the project.

May 30, 2017: Kinder Morgan Canada debuts on the Toronto Stock Exchange after a $1.75-billion public offering.

Aug. 10, 2017: The B.C. NDP government hires former judge Thomas Berger to provide legal advice as it seeks intervener status in the legal challenges against the project filed by municipalities and First Nations.

Oct. 26, 2017: Kinder Morgan Canada asks NEB to allow work to begin despite a failure to obtain municipal permits from the City of Burnaby.

Jan. 17, 2018: Kinder Morgan Canada warns the Trans Mountain expansion project could be a year behind schedule.

Jan. 30, 2018: B.C. government moves to restrict any increase in diluted bitumen shipments until it conducts more spill response studies, a move that increases the uncertainty for Trans Mountain.

March 27, 2018: City of Burnaby, B.C., says it will file an appeal to the Supreme Court in connection with the Federal Court of Appeal ruling.

April 8, 2018: Kinder Morgan Canada suspends non-essential spending on the Trans Mountain expansion project and sets a May 31 deadline to reach agreements with stakeholders.

April 15, 2018: Trudeau flies to Ottawa in an unscheduled break from an overseas trip to accommodate the last-minute summit with Horgan and Notley, where he vowed the pipeline “will be built.”

April 26, 2018: Environment and Climate Change Minister Catherine McKenna published an open letter B.C. Environment Minister George Heyman outlining the steps Ottawa has taken to prepare for a potential spill and offering scientific collaboration with the province to ensure its concerns are being addressed.

April 26, 2018: The B.C. government files a reference question with B.C. Court of Appeal seeking to affirm the province's right to protect it from the threat of a diluted bitumen spill as it tries to thwart the Trans Mountain pipeline expansion.

May, 16, 2018: Finance Minister Bill Morneau announced the federal government was offering indemnity to help ease the political risks for any investors to ensure the project could proceed.

May 16, 2018: Alberta passes legislation giving it sweeping power to intervene in oil and gas exports.

May 22, 2018: The B.C. government filed a constitutional lawsuit countering an Alberta government bill that would limit fuel being sent to the province.

May 24, 2018: The City of Vancouver and Squamish Nation lose legal challenges aimed at quashing an environmental assessment certificate issued by British Columbia for the pipeline expansion.

May 29, 2018: Morneau announces the Canadian government will buy the Trans Mountain pipeline for $4.5 billion.