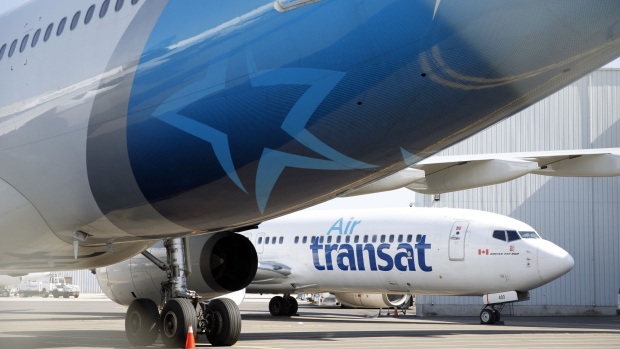 MONTREAL -- Transat AT Inc. expects to resume its operations around mid-June, during the high summer season, the travel company said Thursday as it reported its latest financial results.

The timeline for a restart follows a suspension of the company's regular flights following the Canadian government's request in January to stop travel to Mexico and the Caribbean because of the pandemic.

"We will restart when European volume picks up for the summer, which will probably be sometime around mid-June," Transat chief executive Jean-Marc Eustache said on a call with analysts Thursday. "And we're finalizing our plan to build from there."

Eustache said the Montreal-based company is also working to secure financing in case its deal to be acquired by Air Canada is cancelled. The future of the deal is uncertain as the deadline for it to be completed passed last month.

Both sides now have the right to terminate the agreement, which still requires approval from the European Union. The European Commission was originally expected to make a decision on the deal in December, but later revised that to January.

The commission now says it will hand down a decision sometime in the first half of 2021. Asked about the delay on a call with analysts Thursday, Eustache said "it takes time in Europe to do something."

Transat says it will need at least $500 million in long-term financing if the Air Canada deal is not completed. The company may also be forced to tap into a federal loan program for large employers if the deal falls through and the airline industry does not receive a government bailout, Eustache said on a call with analysts Thursday.

"Having extended our short-term $250 million credit facility to the end of June, we are now making good progress in our efforts to obtain the financing we need to get us back to the level of activity where we can sustain ourselves," Eustache said. "Should the agreement with Air Canada come to an end, we will actively consider all other options."

Transat has been in conversations with the government for months about drawing on the Large Employer Emergency Financing Facility, also known as LEEFF, and could take out a loan as soon as this month, Eustache said.

Transat would not have to issue refunds to passengers who were offered vouchers for cancelled flights if it decides to tap into the LEEFF program, Eustache said.

If Transat were to make use of the program, it would be the second major Canadian airline to do so since the start of the pandemic, after Sunwing announced in February that it was taking a LEEFF loan. Airlines have been trying to preserve cash as low demand and travel restrictions force them to scale down operations.

The airline is not expecting the air travel market to return to 2019 levels until 2024, said Annick Guerard, Transat's chief operating officer.

Revenue totalled $41.9 million, down from $692.8 million a year ago before the pandemic devastated the travel industry.

On an adjusted basis, Transat says it lost $2.89 per share for its most recent quarter compared with a loss of 54 cents per share a year earlier.