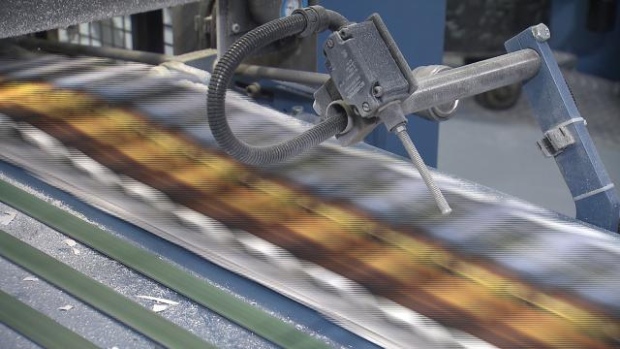 Profits fell to $22.3 million in Transcontinental's second quarter, down from $68.9 million during the same period last year.

On an adjusted basis, net earnings rose nearly nine per cent to $52.6 million from $48.5 million. Adjusted net earnings per share fell almost five per cent to 60 cents from 63 cents, above analysts' expectations of 57 cents, according to Thomson Reuters Eikon.

The Montreal-based company's acquisition of Coveris, a major step in Transcontinental's transition away from its commercial printing roots and toward packaging, boosted total revenues by $232.7 million or nearly 44 per cent to $767.4 million.

Coveris itself added $318.4 million to revenues in the quarter ended April 28, mitigated by deferred revenues of $62.3 million and lost income following the sale of Transcontinental's California newspaper printing business as well as severed ties with Quebec newspapers.

Chief executive Francois Olivier said the printing unit at the 43-year-old company, which last month announced a plant closure in Brampton, Ont., and 125 layoffs by the end of the year, saw weaker results.

"On the printing side, our results continued to reflect more moderate performance in some of our verticals, including our retailer-related service offering," Olivier said in a statement.

Printing revenues fell 8.4 per cent to $334 million and earnings before interest, tax, depreciation and amortization dropped 21.6 per cent to $67 million, according to RBC Dominion Securities analyst Drew McReynolds.

Organic revenue growth in the print department slid 5.2 per cent.

"Packaging hits the mark on both organic revenue growth and margins," McReynolds added.

The Coveris purchase aims to bolster Transcontinental's packaging services for dairy, pet food and consumer products and add agriculture, beverage and protein into the mix.

The company now employs about 4,800 people in flexible plastic and paper operations across 28 plants in the United States -- where the majority work -- as well as Canada, Mexico, Guatemala, Ecuador, New Zealand, China and the United Kingdom.