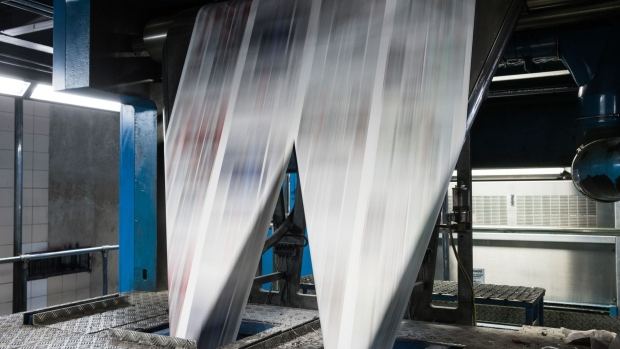 Newsprint passes through a rotary press at the El Tiempo SA printing facility in Bogota, Colombia, on Friday, Dec. 1, 2017. Founded in 1911, El Tiempo is a nationally distributed daily newspaper and has the highest circulation in Colombia. Photographer: Maurico Palos/Bloomberg , Bloomberg

MONTREAL - Transcontinental Inc. says its net income attributable to shareholders surged to $35.6 million in the second quarter as its printing sector marked the first organic growth since the beginning of the pandemic.

The Montreal-based packaging and printing company says it earned $35.6 million, up nearly 39 per cent from $25.7 million a year earlier. It included $7.5 million from the Canada Emergency Wage Subsidy, down from $8.2 million in the second quarter of 2020.

Transcontinental was expected to post 45 cents per share in adjusted profits on $626.2 million in revenues, according to financial data firm Refinitiv.