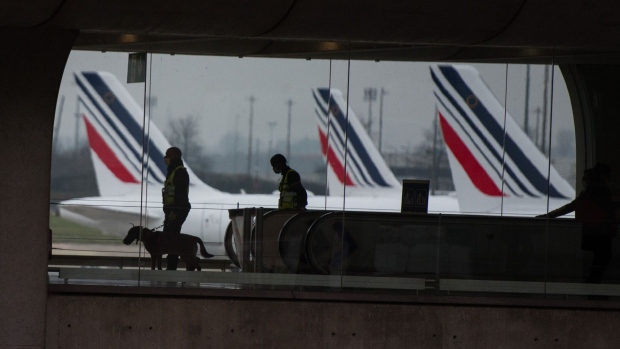 French police officers and a sniffer dog patrol a terminal building at Paris-Charles de Gaulle airport in Paris, France, on Tuesday, Dec. 14, 2021. The omicron variant of Covid-19 is scrambling the European Union’s plans to simplify its travel rules, particularly as some countries move ahead with new unilateral restrictions. , Bloomberg

(Bloomberg) -- The chaos that has plagued the European travel industry for weeks is coalescing in France as staff at Paris-Charles de Gaulle airport plan to strike for the second day in a row Friday and a country-wide rail walkout looms next week.

France’s civil aviation authority ordered the scrapping of 17% of flights through the hub between 7 a.m. and 2 p.m. Friday after talks between unions and management at airport operator Aeroports de Paris failed to reach a wage deal.

As a result, Air France-KLM, the international hub’s biggest carrier, canceled 64 flights at its French arm, while planning to keep all long-haul and nearly 90% of short and medium-haul service.

The intensification of travel turmoil in France follows upheaval at other major European cities over the past weeks including in London, Amsterdam and Frankfurt due to staffing shortages and labor action. The U.S. has also been plagued by disruptions, with Delta Air Lines Inc.’s chief executive officer on Thursday apologizing to customers for an “unacceptable” level of canceled and delayed flights.

As demand surges, airports and carriers in Europe have been forced to reduce flight schedules due to staffing shortfalls.

French unions and ADP management have been locked in negotiations over wages and working conditions, as French inflation quickened to the fastest since the euro was introduced.

The scrapping of flights Thursday and Friday follows day-long labor action on June 9 during which disruptions spilled over to Paris’s second airport, Orly. On Friday a broad range of workers including firefighters, and security and refueling personnel were scheduled to strike.

While ADP and subcontractors are trying to hire thousands of workers, neither the hub operator nor Air France have announced sweeping flight reductions for the busy summer season like Deutsche Lufthansa AG, KLM and British Airways.

Air France-KLM has forecast using 90% of its 2019 capacity to meet a rush of demand from vacationers, and is operating its entire fleet, having pulled jets from routes in Asia where Covid restrictions are still limiting travel. About 300 pilots have been hired, Chief Executive Officer Ben Smith has said, expressing frustration at having to cancel flights due to airport problems.