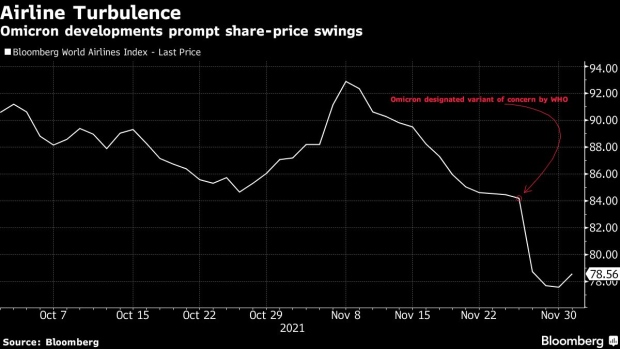 The comments from Wizz President Robert Carey on Wednesday show a trend seen throughout the Covid-19 pandemic being heightened by the new omicron variant. Passengers are assessing whether they will be able to travel amid new border closures, he said at the World Aviation Festival in London.

“Customers are booking closer and closer in,” Carey said. “Every week it feels like it gets one day closer to departure.”

Omicron has taken less than a week to throw a steady travel recovery into question, giving aviation investors flashbacks to the early days of the Covid-19 pandemic. For now, carriers including EasyJet Plc have said they’re seeing a softening of demand through year-end, while others such as JetBlue Airways Corp. focused on the massive U.S. market haven’t seen a major dent.

With governments tightening borders daily, airline executives are grasping to understand the ramifications -- even as scientists search for answers about the risk caused by the variant.

“The latest round of government restrictions across the world have been uncoordinated and inconsistent, and that’s made Christmas travel more complicated for both airlines and passengers,” said former British Airways Chief Executive Officer Alex Cruz. While carriers “can quickly adapt to knee-jerk reactions, it is still a blow to the recovery which was just getting underway.”

Airline stocks have seesawed since late last week on developments tied to omicron, with European airlines such as Air France-KLM, Deutsche Lufthansa AG and British Airways IAG SA rising on Wednesday with the broader market as traders assessed the latest news.

The setback to international air travel is poised to deepen with the U.S., Europe and Japan all signaling tighter borders.

Japan asked airlines to stop new inbound bookings for the month of December. Travel on previously purchased tickets can go ahead, pending developments with omicron.

The U.S. is poised to require arrivals show a negative Covid test taken within one day of departure instead of the current three days, and the European Union will ask governments to review travel rules daily to stop the variant’s spread, Bloomberg reported.

“It’s too early to say at this point whether we’ve seen an impact or not,” JetBlue CEO Robin Hayes said in a Bloomberg TV interview from the event. With the U.S. coming off of a busy Thanksgiving holiday weekend, flying and booking remain robust, he said.

However, Hayes added, JetBlue has seen greater interest in flexible products like tickets that come with no change or cancel fees, as well as travel insurance.

The New York-based discount operator is seeing longer wait times on telephone lines and is looking to hire hundreds of people to address it, he said.