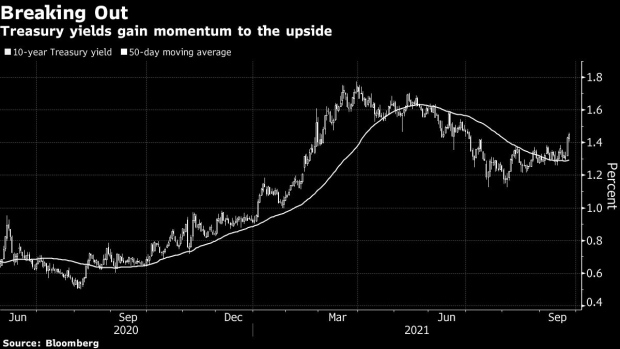 (Bloomberg) -- Traffic on the road to higher Treasury yields appears finally to be clearing up as central banks edge closer to ending emergency pandemic policies.

Bears are emboldened, prompting a fresh round of shorts betting U.S. debt will keep falling -- driving yields up even more. Scoring a sustainable victory on that trade won’t be easy. The massive jump in yields during the first quarter petered out as Covid’s resurgence dimmed the economic growth outlook.

But, for now, a hawkish tilt from the Federal Reserve and Bank of England has cleared the way for yields to rise further.

“Nominal yields are still too low and will move higher,” said Gary Pollack, head of fixed-income for private wealth management at Deutsche Bank. “But there is a fight going on in the rates market between the fundamentals -- which on inflation looks positive and supports higher yields -- versus the technicals from demand flows from the Fed and foreign buyers. But I think, eventually, the fundamentals will win out and yields do slowly grind higher.”

The Fed Chair Jerome Powell said this week that the central bank could in November start tapering its asset purchases that helped the U.S. economy weather Covid-19. The exit of such a big bond buyer might free yields to leap higher.

Officials also updated their forecasts (aka the dot plot) for the Fed’s benchmark rate, showing half of them see an increase by the end of 2022, a more hawkish projection than most strategists foresaw.

Traders will get a hint of how feasible that is in early October when the next monthly jobs report comes out.

Bulls are nursing losses. U.S. Treasuries are down about 1.8% so far this year, while global sovereign bonds are off over 4%, according to Bloomberg Indices.

Powell is trying to frame the tapering and rate-increase decisions as separate from each other, but seems to be fighting a losing battle. This week’s updated dot plot coupled with the tentative tapering schedule spurred derivatives traders to bring forward their target for the first hike: December 2022, versus early 2023.

The Bank of England is also fueling higher yields. It raised the prospect of hiking interest rates as soon as November -- driving yields on U.K. gilts and German bunds higher.

“Global central banks’ wave of liquidity is just waning,” said Gene Tannuzzo, a portfolio manager at Columbia Threadneedle. “There’s a combination of central banks that are moving from an economic tailwind to at least neutral and maybe in the foreseeable future a headwind. There’s now a floor under 10-year Treasury yields, with now probably your near-term bogey moved to around 1.5% to 1.6%.”

Tannuzzo has a defensive posture on long-term Treasuries. He favors floating-rate loans from banks and debt from high-yield corporate issuers who have prospects to claw their way back to an investment-grade rating.

Momentum indicators for their part support higher yields, after the 10-year yields distinctly breached their 50-day moving average, which stood at 1.29% on Friday.

Investors are monitoring the debt crisis at China’s Evergrande. And China’s recent regulatory actions, including a ban on crypto transactions, are seen hurting growth.

“There is momentum in the near-term for yields to keep rising,” said Tracy Chen, a portfolio manager at Brandywine Global Investment Management. “But we are very cautious on global growth because what China is doing is pretty devastating as they are tightening on nearly all fronts. We think Chinese growth will continue to slow down.”