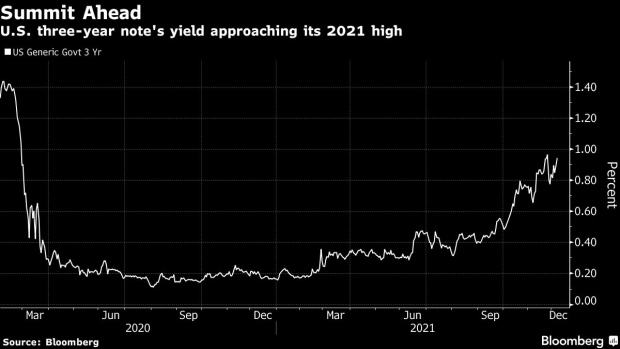 (Bloomberg) -- Short-maturity Treasury yields climbed steeply in U.S. trading Tuesday ahead of the week’s first coupon auction -- a three-year note sale that has traders on edge after last month’s produced some of the weakest demand metrics since the dislocations of early 2020, and an ensuing selloff.

As two- to five-year yields climbed by at least four basis points, the three-year note’s rose as much as 5.2 basis points to 0.956%, within three basis points of its 2021 high reached Nov. 24. A new three-year note is to be sold at 1 p.m. New York time in a $54 billion auction, the first since the Federal Reserve’s hawkish policy pivot last week.

Similar to Monday, when yields across the curve increased by 4 to 10 basis points, the move was accompanied by rising U.S. equity benchmarks and a heavy slate of new corporate bonds. The added element is that last month’s three-year auction drew a yield that was a basis point higher than dealers expected, making it the worst by that metric since the dislocations of March and April 2020. Yields subsequently cheapened further.

The prospect of tighter Fed policy, with rate hikes seen starting by the middle of next year, has pressured the policy-sensitive sector of the bond market. With inflation data for November due at the end of the week and the Fed meeting next week, buyers of short-dated Treasury debt are wary.

“More aggressive normalization assumptions are not a reason to like 3s,” even as the auction appears likely to draw the highest yield since February 2020, wrote analysts at BMO Capital Markets. It may be enough, though. Overseas buyers took their second-biggest slice of a three-year offering since 2017 last month, “a good signal of that investor base’s appetite for the front-end at this stage particularly as overseas yields have not kept pace with the selloff in Treasuries.”