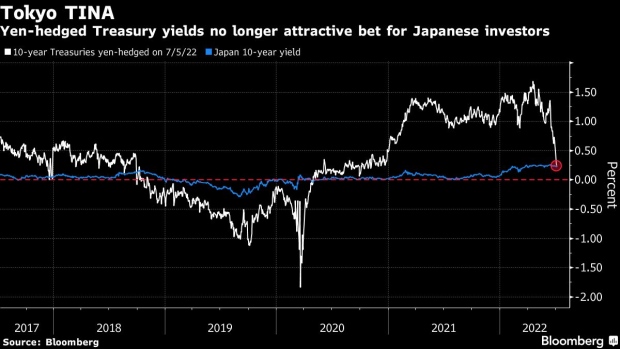 The US Treasury building in Washington, D.C., US, on Sunday, May 22, 2022. The Federal Reserve raised interest rates by 50 basis points earlier this month and the chairman indicated it was on track to make similar-sized moves at its meetings in June and July. Photographer: Joshua Roberts/Bloomberg , Bloomberg

(Bloomberg) -- The rally in Treasuries is likely being skipped by some of their biggest backers -- Japanese investors.

A combination of the recent bond rebound and the spiraling cost to hedge the volatile yen has wiped out the yield premium a Japanese investor once enjoyed from US debt. The yen-hedged yield on 10-year Treasuries has collapsed to 0.24% from almost 1.7% in April, a level almost identical to the 0.22% yield on comparable Japanese debt.

Japanese investors hold the largest pile of Treasuries outside the U.S., over $1.2 trillion worth, but have been cutting their overseas bond exposure amid the global debt selloff. Weekly data from the Ministry of Finance show just four weeks of net purchases of any significance this year.

Treasury yields have pulled back from their mid-June highs as investor concerns mount that Federal Reserve rate hikes will drive the US economy into recession. While that may signal that the debt selloff has peaked, for Japanese traders, the yen has remained under pressure, trading close to a 24-year low against the dollar.

The currency remains caught in a vice between a dovish Bank of Japan pinning rates to the floor to boost a moribund economy and aggressive Fed hikes. Yen investors have to pay close to 2.6% to hedge their dollar exposure for three months, surging from around 0.3% at the beginning of the year, a Bloomberg gauge showed.

“Unless investors think US yields have peaked with the Fed fighting inflation through rate hikes, it’s difficult to invest in Treasuries without hedging,” said Akio Kato, general manager of strategic research and investment at Mitsubishi UFJ Kokusai Asset Management. “But it cannot be said that the 10-year yield has reached its peak at 3.5% in June.”

The rise in longer-dated Japanese bond yields is also likely shifting local interest to the domestic market, with yields on the 30-year debt trading just below 1.3% this week. Returns on the long bond is typically compared with benchmark 10-year foreign debt when Japanese funds allocate money due to a preference for more liquidity for overseas investments.