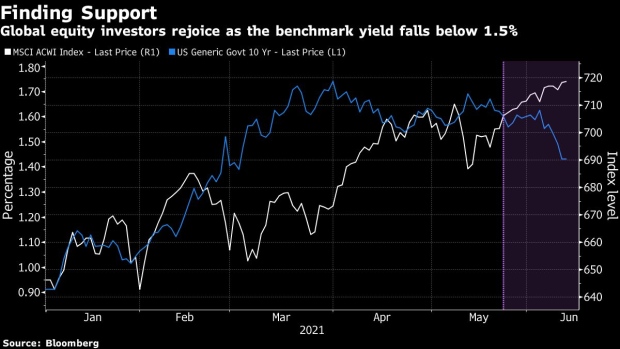 People sit in the outdoor seating area of a Nathan's Famous Inc. restaurant at Coney Island on Memorial Day in the Brooklyn borough of New York, U.S., on Monday, May 31, 2021. Mayor Bill de Blasio said the city will bring mobile vaccination units to beaches and parks starting during the Memorial Day weekend and lasting through the summer, including the Rockaways, Coney Island, Central Park and Governors Island. Photographer: Nina Westervelt/Bloomberg , Bloomberg

(Bloomberg) -- The strongest Treasuries rally in a year is encouraging investors to pile back into riskier assets, as they grow more confident the Federal Reserve is right to call a surge in consumer prices transitory.

The tumble in benchmark 10-year yields to three-month lows is prompting market participants to dial down concerns that the second half of 2021 could see a rapid rise in interest rates that would ripple through equities and commodities. Assets will remain well supported by the liquidity created by ultra-loose monetary policies globally and as economies continue to accelerate out of pandemic-induced recessions.

The newfound comfort about inflation is making investors and strategists bullish on assets that experienced bouts of underperformance since yields started rising in August last year. Expensive growth stocks, especially technology companies, and emerging-market assets have solidified their place on some investors’ shopping lists.

“Yesterday’s move in bond yields support the Fed’s narrative that inflation is likely to be transitory,” said Suresh Tantia, an investment strategist at Credit Suisse Group AG. “Investors are piling into rate-sensitive parts of the markets, such as technology and healthcare stocks, investment-grade bonds and gold.”

Treasury 10-year yields dropped 6 basis points Thursday even after a report showed consumer prices rose in May at the fastest annual pace since August 2008. Yields are down 12 basis points this week, are on track to fall by the most in a year, as traders look to be further unwinding short positions in U.S. government debt despite the jump in consumer prices. That risk-on mode is making emerging markets a preferred bet for some investors.

“EM debt we expect to rally, and the consequent dollar weakness will help take away some of the fear of the need for higher rates to protect currencies,” said Gary Dugan, chief investment officer at the Global CIO Office.

Todd Schubert, head of fixed-income research at Bank of Singapore Ltd. is another fan of EM assets. He cited the rally in Treasuries and U.S. dollar’s declines as backing a favorable global outlook for credit in general and for EM credit in particular. Schubert expects robust issuance and further spread tightening in developing-nation bonds.

Expectations for lower long-term yields are also generating calls to rotate some money back toward growth stocks. Elevated valuations had spurred a rush of money away from pandemic-era darlings such as tech companies which attracted as long as rates were seen at the lower bound for longer. Value segments became the new favorites as reflation trades took off in early 2021 -- cheaper, cyclical shares such as banks and industrials led the charge.

“Underneath the surface, lower UST yields are likely to put a pause on the rotation from growth to value stocks we’ve seen recently,” said Sylvia Sheng, global multi-asset strategist at JPMorgan Asset Management. “From a regional perspective, this would benefit markets such as U.S. large cap and emerging markets, which are more geared to growth stocks at the expense of more value markets such as Europe and Japan.”

“If yields continue to stay at current levels and volatility drops further, we might see some reversal to the flow and momentum in the growth to value rotation,” said Michael Foo, chief investment officer at HP Wealth Management. He added that technology stocks may close their underperformance gap in the near term.

To be sure, some market participants such as Credit Suisse’s Tantia still find cyclical stocks appealing, on expectations the U.S. Treasury yield will rise to 2% over the next 12 months and the Fed will eventually announce tapering of its bond-buying program.

“In equities, we expect cyclical markets such as Germany, U.K., South Korea and Thailand to continue to outperform the rest of the world,” said Tantia. “Among sectors, we prefer financials and materials and would recommend to use any dip as a buying opportunity.”

The sharp rally in U.S. Treasuries is “likely to spill over and drive yields lower across Asian curves, with a few exceptions perhaps,” Citigroup Inc.’s strategist Gaurav Garg wrote in a note on Thursday. “We are overweight duration in the Philippines and add in Malaysia now for the EM bond portfolio.”

Garg also likes carry over the summer months and is overweight on the yuan and rupiah, he wrote in the note.