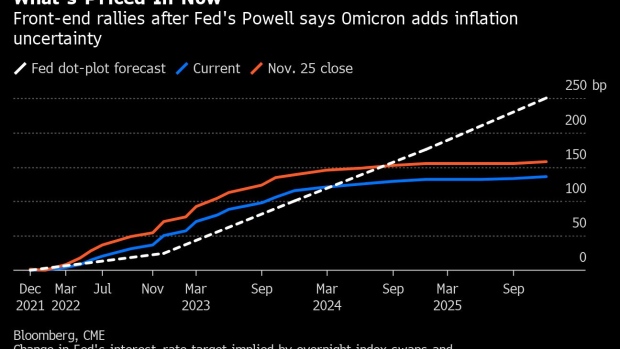 (Bloomberg) -- Treasuries ended Monday near their highs for the session after the market failed to really make a dent in the haven rally from Friday that was driven by concern over the new omicron variant of the coronavirus.

Front-end yields actually closed out the day slightly lower than where they ended Friday’s holiday-abbreviated session, while rates on longer-term securities were only a few basis points higher on the day.

Swap markets are continuing to price in around two quarter-point Federal Reserve rate hikes for 2022, in line with the close last week and down from the three seen before the emergence of the latest named virus variant.

Fed boss Jerome Powell, in his first public remarks on the new variant, did little to prevent speculation that the new variant might slow policy rate increases, saying that it poses risks to the central bank’s employment and inflation mandates.

Yields slid to their lows of the day following the release of his written remarks, which were published ahead of a Congressional appearance Tuesday.

The yield on two-year Treasuries slid more than a basis point to 0.48%, while the 10-year rate registered a session low of around 1.49%, up just 2 basis points.