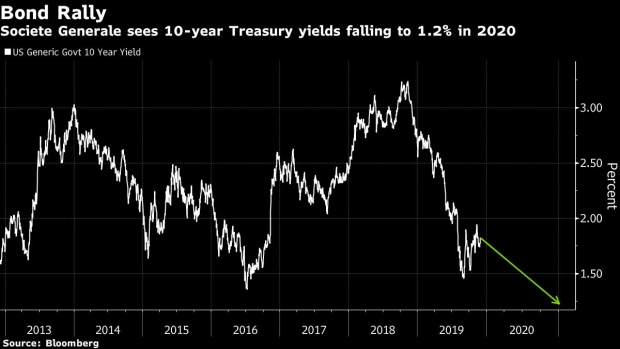 (Bloomberg) -- Treasury 10-year yields may slide to a record low 1.2% by the end of next year as the U.S. enters a recession, according to Societe Generale SA.

Benchmark 10-year Treasuries will probably rally as the Federal Reserve cuts interest rates by a full percentage point in the first half of 2020 to spur inflation, strategists including Subadra Rajappa wrote in a note.

“The market is pricing in a Fed hold, but 10 years into this expansion, we see the Fed leaning toward a more accommodative stance,” the analysts wrote. “We expect a steady decline in Treasury yields in 2020.”

Treasuries have led a global bond sell-off since September as the U.S. and China edged toward a partial trade deal, and expectations for the Fed to add to its three rate cuts this year fade. SocGen joins others, including Japan’s Asset Management One Co., in arguing that the recent optimism is misplaced.

Asset Management One said last month that the Fed will end up lowering its interest rates toward zero due to structural changes in the economy and low inflation.

Yields on 10-year Treasuries have rebounded about 40 basis points since touching a three-year low of 1.43% in September.

They were little changed at 1.82% Tuesday after rising as much as 8 basis points on better-than-expected China factory data. The gains were then pared after a miss on U.S. manufacturing data.

“Beyond the trade war noise, structurally, we see the risk of lower yields outweighing the risk of higher yields,” according to SocGen’s strategists. “‘We recommend investors remain on high alert and retain long duration positions in bonds outright and as a hedge against risk-asset exposure.”

To contact the editors responsible for this story: Tan Hwee Ann at hatan@bloomberg.net, Joanna Ossinger