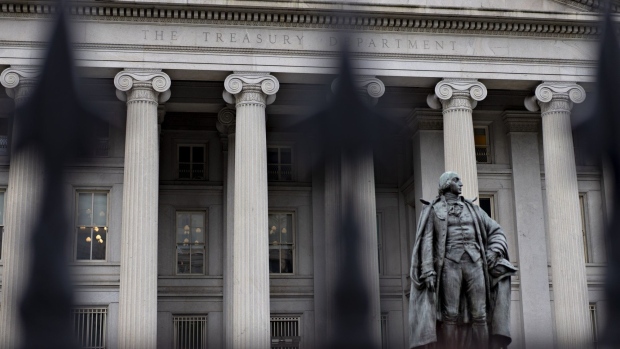 The U.S. Treasury building stands in Washington, D.C., U.S., on Wednesday, May 20, 2020. Treasury Secretary Steven Mnuchin said he plans to use all of the $500 billion that Congress provided to help the economy through direct lending from his agency and by backstopping Federal Reserve lending programs. , Bloomberg

(Bloomberg) -- The U.S. Treasury five-year note’s yield matched a record low Monday as expectations for Federal Reserve policy continued to drive gains for that segment of the market.

The note’s yield declined as much as 3.15 basis points to 0.2705%, equaling the level reached on May 8, when 2-year yields also fell to record lows amid speculation that the Fed would eventually drop its resistance to negative policy rates. The five-year segment outperformed both shorter- and longer-dated notes Monday.

The five-year yield began the year at 1.71% and exceeded 0.50% as recently as June 5. Its move to record lows reflects expectations that the Fed, having already lowered the main policy rate to zero, will eventually adopt yield caps for intermediate maturities to further support the U.S. economy.