The 10-year treasury could easily reach 2% over the next several weeks: Cresset Capital‘s Ablin

The United Arab Emirates went on its biggest Treasury-buying spree on record in February, purchasing more of the safe-haven securities than China in one of the worst months for U.S. debt markets in years.

The Gulf nation, OPEC’s third-biggest crude producer, raised its stockpile by about US$17 billion to US$50.6 billion, making it the largest buyer after the U.K. that month, according to U.S. Treasury Department data. A spokesperson for the UAE central bank declined to make any immediate comment Wednesday.

Though the UAE, whose capital Abu Dhabi accounts for almost 6 per cent of the world’s oil reserves, may have built up enough of a buffer to commit more if its dollar earnings to the US$21 trillion Treasuries market, it came as prices tumbled amid growing expectations of a global economic rebound. U.S. debt dropped 1.8 per cent in February, according to a Bloomberg Barclays Index, with the yield on the benchmark 10-year note climbing about 34 basis points, its sharpest increase since November 2016. 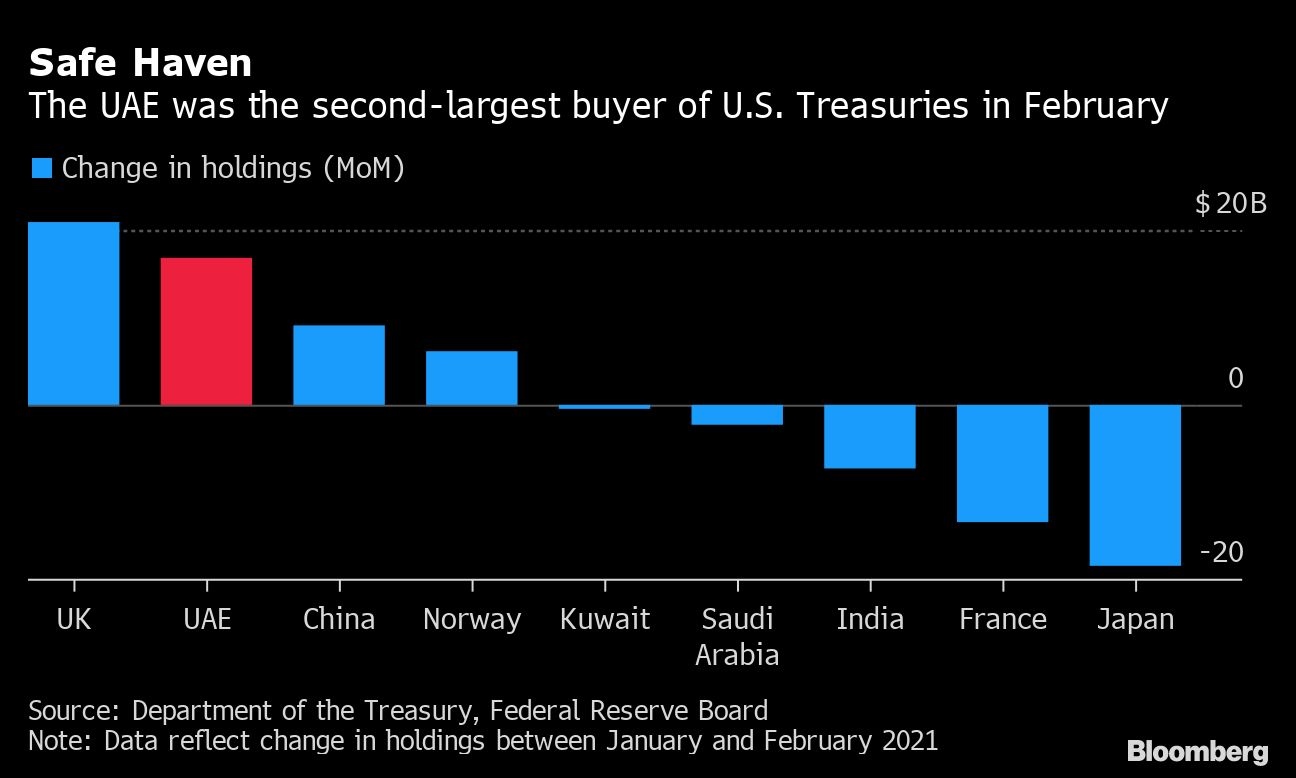 “Other than the fact that rates were higher and that is the deepest and most liquid market, I wouldn’t know any other reason” why the government would boost purchases, said Abdul Kadir Hussain, the Dubai-based head of fixed-income asset management at Arqaam Capital.

The move took UAE holdings to levels last seen in 2019 before the global pandemic and the crash in oil prices. China bought US$9 billion of Treasuries in February to bring its total to US$1.1 trillion, the highest since mid-2019. The country’s holdings are second only to Japan, which holds almost US$1.3 trillion.

Although a recovery in oil has been a boon across the energy-rich Middle East, the windfall may be even bigger for the UAE since it needs one of the lowest crude prices to balance its budget. Other top oil exporters in the Persian Gulf, including Saudi Arabia and Kuwait, cut back their Treasury holdings in February.

The official tally may not accurately reflect the true size of a country’s holdings if they are held by banks in foreign countries.

Like many of its regional peers, the UAE needs to have sufficient reserves to maintain confidence in its currency peg to the dollar. The central bank’s gross international reserves rose to almost 389 billion dirhams (US$105.9 billion) in February, from 381.9 billion dirhams a month earlier.

The International Monetary Fund estimates the UAE central bank’s reserves will reach US$119 billion this year, in addition to more than US$1 trillion in assets managed by the country’s wealth funds.

Treasuries extended their declines in March, with the 10-year yield jumping a further 34 basis points to 1.74 per cent. The yield was at 1.58 per cent as of 10:39 a.m. in London Wednesday.