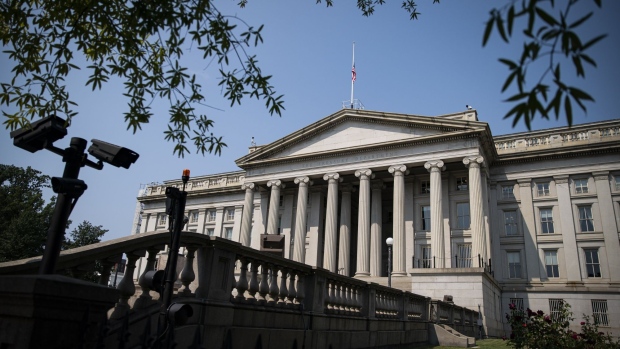 The US Treasury Department in Washington, D.C., US, on Friday, Sept. 16, 2022. Yellen yesterday highlighted the Biden administration's plans for boosting the IRS, including efforts to dramatically increase the capacity of in-person and call-in support services. Photographer: Al Drago/Bloomberg , Bloomberg

(Bloomberg) -- Short-end US interest rates surged and the Treasury yield curve flattened after a Federal Reserve policy decision to lift the benchmark rate by three-quarters of a percentage point and new forecasts that indicate a higher terminal rate for this hiking cycle.

The two-year Treasury yield jumped as much as 15 basis points to 4.11%, the highest since 2007, as Fed swaps moved to price in a terminal rate for the Fed benchmark of around 4.65% for the current cycle. The pricing suggests that will come in the first part of 2023.

“The Fed is on a mission, and if inflation stays high, they are not afraid to keep going,” said Priya Misra at TD Securities. The latest decision “Makes owning the front end not look attractive.”

Rates at the very long end of the market, meanwhile, fell, as the prospect of tighter policy added to concern about potential recession risks. The 30-year yield was down around 4 basis points to 3.53%. The yield curve flattened, with the inversion between the 2- and 10-year rates shifting to as much as 52 basis points and the 30-year rate moving to be as much as 28 basis points below the 5-year.

Fed officials raised interest rates by 75 basis points for the third consecutive time and forecast they would reach 4.6% in 2023, stepping up their fight to curb inflation that’s persisted near the highest levels since the 1980s.

In a statement Wednesday following a two-day meeting in Washington, the Federal Open Market Committee repeated that it “is highly attentive to inflation risks.” The central bank also reiterated it “anticipates that ongoing increases in the target range will be appropriate,” and “is strongly committed to returning inflation to its 2% objective.”